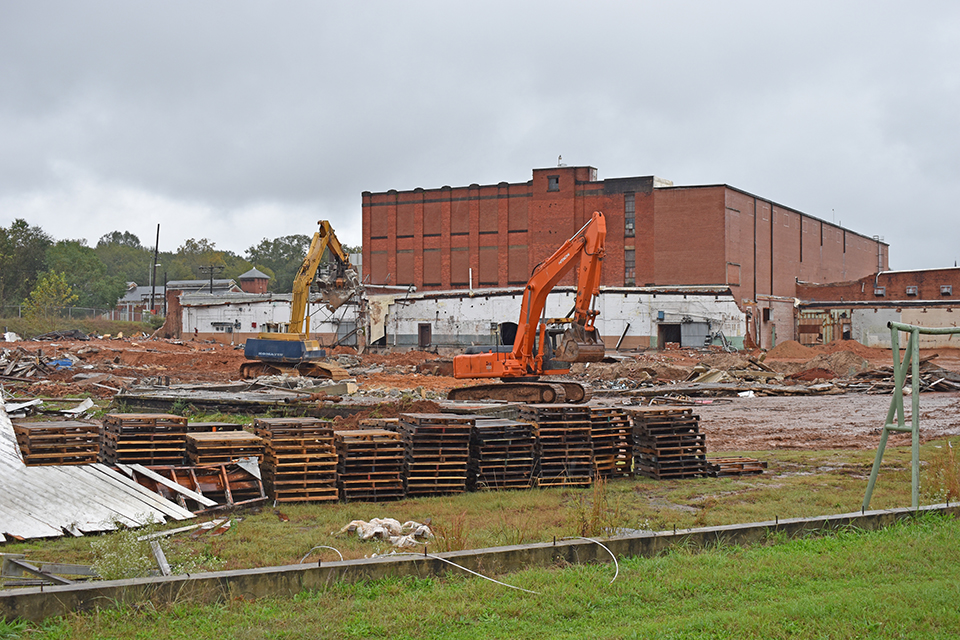 VALLEY — The demolition of Langdale Mill has been proceeding despite some recent rains. Valley Mayor Leonard Riley said the Henry Hudson Company is approximately one-third through the project. They started on the north end of the mill site and have been proceeding toward the main part of the mill complex. Thus far, some warehouse and office areas have been removed.

Riley has been impressed with the work that’s been done so far.

“They have done a good job of hauling off what the debris they can’t use and hauling in fill dirt to level places they’ve cleared,” Riley said. “They’re not leaving piles of debris. They will be grassing over the areas they are clearing off.”

The brick, metal and wood that’s recyclable is being stored at the former cotton warehouse on River Road. That’s the location of the Henry Hudson Flooring Company. The salvaged wood can be cut up there and sized for new uses such as furniture.

“They have a lot of wood in the warehouse,” Riley said. “They have an impressive operation there and are making good use of the wood they’ve been salvaging.”

One of the buildings that was torn down was not in good condition. Most of the wood was rotten and had to be disposed of.

The demolition has yet to reach the main four-floor part of the mill. That’s when the lion’s share of the work to be done will get started.

There has been a mill on the Chattahoochee River in what’s now the Langdale community since the 1840s. Pioneer Chambers County settler Elisha Trammell bought extensive lands in what’s now Langdale and Fairfax and built a large grist mill on the site where Moore’s Creek flows into the river.

In the post-Civil War era, Langdale Mill’s predecessor, the Chattahoochee Manufacturing Company was built on the same site.

It went into production in 1866, the same year the Alabama & Georgia Manufacturing Company went into business downstream in what is now River View. The settlements that grew up around the two mills were then known as Upper Town and Lower Town.

The two mills struggled mightily in their early years, especially after the Panic of 1873. In 1880, they became part of the West Point Manufacturing Company under the leadership of Lafayette and Ward Crockett Lanier.

Thomas Lang and his son, William Lang, of Oldham, England were hired to run the two plants, and they had them equipped to produce cotton duck, a product that was much in demand at the time.

The successful manufacture of this product made the local mills stable for the first time. Some of the cotton duck made here was used on sailing ships, but the bulk of it played a role in the development of the country.

Millions of yards of cotton duck were used in the camps that housed railroad workers who built the five transcontinental lines that crossed the country from 1865 to the 1890s.

The village of Upper Town was named in honor of Tom Lang in appreciation of the growth of the community. experienced in the 1880s and 1890s.

In March 1886, Langdale Mill caught fire and burned to the ground, producing a column of black smoke that could be seen as far away as Columbus, Georgia, some 40 miles to the south.

With textiles being very much in demand, financing was raised to build a bigger, better mill made of brick in 1887.

That’s the main part of the mill building that still stands.

Cobb Memorial Archives has a photo of that mill that was taken when it went into production in 1887. It was taken on the south end of the mill looking north. Mill Superintendent Tom Lang can be seen standing under an archway next to a six-foot-tall roll of cotton duck.