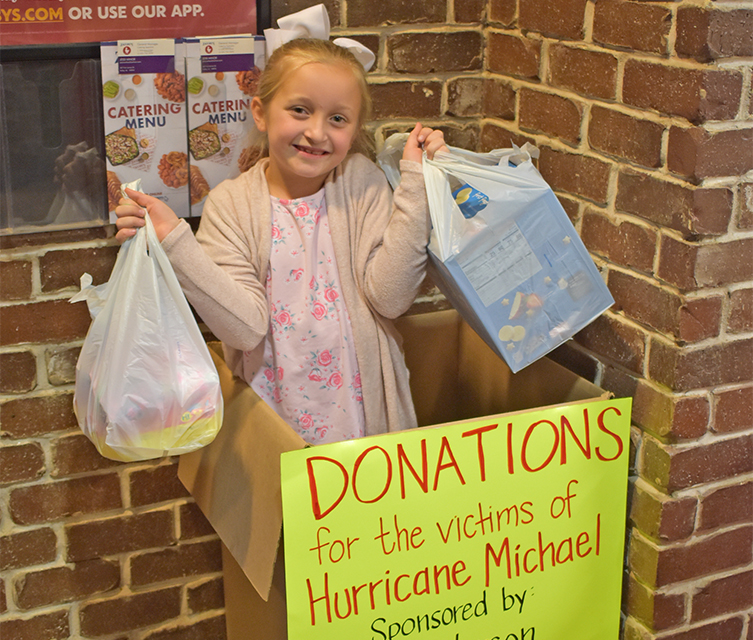 LANETT — Though it made landfall over five weeks ago, Hurricane Michael’s wake is still being felt by many. Seeing this need and wanting to do their part to help, 7-year-old Brealey Henderson and her father Sean have teamed up with Zaxby’s in Valley and Opelika to collect items for relief.

“This is going to the people in the storm, because they need help,” Brealey Henderson said. “We are trying to get people to bring stuff to the office so that we can put it in the trailer.”

The family, with the help of local Zaxby’s general manager Jessi Minor, is collecting non-perishable foods, bottles of water, tarps, toiletries and anything else that might be put to use by those affected by the storm. Collection boxes can be found at either Zaxby’s location or at Phillip Henderson Insurance in Lanett and Opelika.

“I just felt like I wanted to do something,” Sean Henderson said. “I came up with the idea since I have a trailer in front of my office”

Anyone who brings donations to Zaxby’s, Minor said, will receive a discount card for their meal.

“I feel like a lot of people have said ‘Well, we have already donated’ but there are still so many people in need,” Minor said.

Since Henderson wants to raise as much as he can for the victims, there is no time window for donating and they will accept items until there is no more room to bring them.

“People keep asking when the last day to donate is, but it will just be when I can’t fit anything more in [the trailer],” he said. “I wanted to do that and put it on Facebook. I feel like you donate things and don’t always know where it is going all the time, so what I was going to do is video us going down there and bringing the donations.”

Brealey and her father have been steadily loading items into the trailer, but they say there is still more room to be filled. With no specific area in mind to bring the donations to, Henderson said that they want to focus on more rural areas of Florida.

As of this week, they have approximately one-fourth of the trailer full. Brealey said she hopes more and more people donate so they can send relief soon.