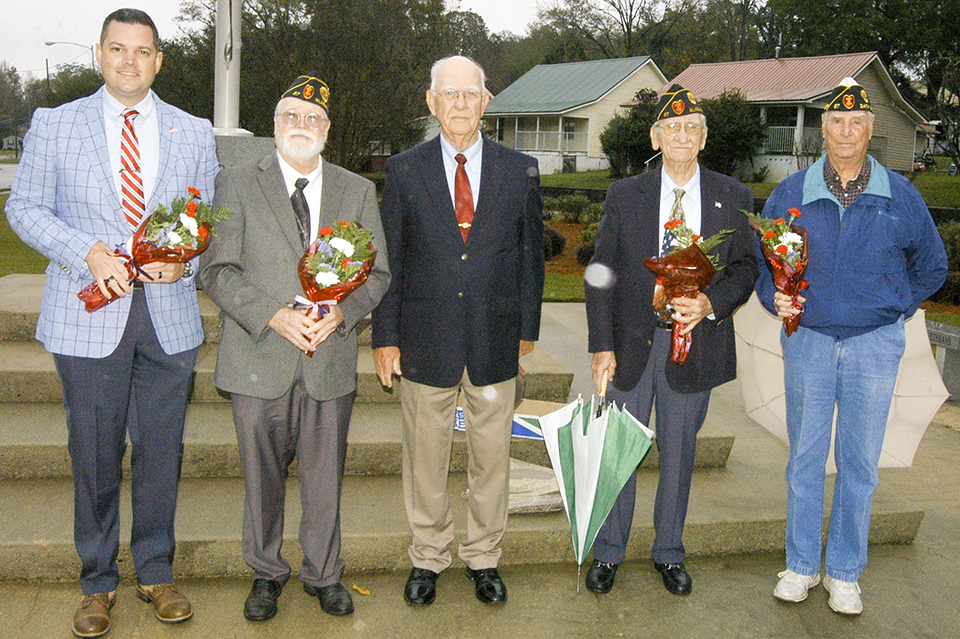 VALLEY — A steady rain on Monday morning caused the annual Veterans Day program at Veteran’s Memorial Park to be shifted indoors to the Bobby Crowder Room at Valley Community Center. Members of American Legion Post 67 had planned to leave flowers at the memorials in the park that included the names of 93 local men who have died in the nation’s conflicts since World War II. After the program, those flowers were placed in the park.

The indoor program focused on the 100 year anniversary of the end of World War I. Armistice Day began in the years after that and after WW II expanded into the Veteran’s Day programs that are now observed.

“We didn’t pick out the best weather,” said Post Commander Lanny Bledsoe. “We don’t have any control over that, though. It’s always good to see veterans at evens like this. We are a divided country today, but I do think that most people support our soldiers. It wasn’t like that in the late 1960s when soldiers returned from Vietnam. Today we are honoring some young men who served, but never got to be veterans,” Bledsoe continued. “They went off to war and never returned. In Veteran’s Park there are names of 93 young men who never returned home. We should have a special recognition of them on this day.”

In speaking to the crowd assembled in the Community Center, Mayor Leonard Riley said that today’s active duty military personnel are deserving of everyone’s respect. “Those who bear the burden of defending us and defending our way of life are members of our armed services,” he said. “With a voluntary military, these men and women have freely chosen to take on this burden. They have made this choice because they share the common traits of patriotism, love of country and a willingness to serve and sacrifice for the common good. They deserve our gratitude for keeping America free.”

“America is exceptional because of our tolerance and our freedoms,” Riley continued. “America does not need to be made great again because America has always been great. That’s why people from all over the world are willing to risk everything to become what we are blessed to be born as – an American.”

State Rep. Debbie Wood said that Americans should never forget those soldiers who made the ultimate sacrifice. “Their spirits are still with us,” she said. “On days like today we should talk about them and thank them for what they did. I could not have run for political office without veterans sacrificing to protect our freedoms. It’s good to see a number of veterans here today for this program. Thank you for being here today. I look forward to serving you over the next four years.”

Post Commander Bledsoe said that the main purpose of the local post is to support local veterans in any way they can.

“In July, we have a Day for Veterans right here at the Community Center,” he said. “It gives our younger veterans the chance to talk to representatives of the VA and from the Veterans’ Hospital in Tuskegee to learn more about their benefits.”

Legion Auxiliary members Billie Jean Clem and Nita Abney talked about what they do. When the wars in Afghanistan and Iraq were well under way, they sent care packages to the troops. “We will write letters of support to any local person who has a family member serving,” she said.

Bledsoe asked veterans of WW II, Korea and Vietnam to stand and be recognized. Two WW II veterans who are active with the post, Bernard Paschal and John Lyons, had planned to participate in the outdoor program but were not present for the indoor program because of the bad weather. Korean War veterans present for the program included Johnny Miles, Eddie Reese, James O’Steen and Charles Pigg. They were to have placed flowers at the Korean War monument in the park.

Bledsoe kidded Miles about his service. “I have a problem with you and Walt Okrutny about jumping out of planes,” he said, noting  that both soldiers had airborne duty.

The Vietnam era group present included Otis White, Bobby Elliott, Frank Ray, David May, Sammy Newton, Bill Williams and Johnny Miles (whose service overlapped Korea and Vietnam). They took turns talking about their service years. One of them said he was a member of a diverse unit, that had soldiers of caucasian, African American, Puerto Rican and Mexican-American backgrounds. He said that some of the white soldiers would sometimes taunt soldiers of color that they were lacking as men and couldn’t be trusted. The veteran said he always made it a point to tell such a soldier when he was with him one-on-one that the only color that mattered to him was olive green – the color of their uniform – and that they could always count on having his back.