Lockhart elected to a 7th term as Chamber County Sheriff 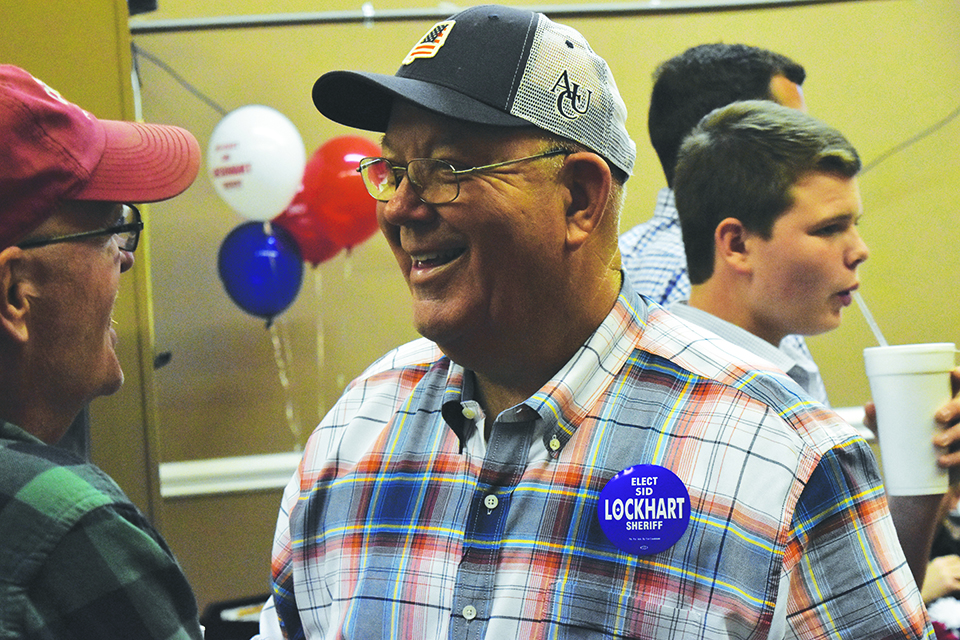 Chambers County Sheriff Sid Lockhart talks with Richard Slay of Penton at Pizza D’Action in LaFayette Tuesday night after being re-elected to a historic seventh term as sheriff. In January, he will become the longest tenured sheriff in county history. Photo by Dusitn Duncan

Chambers County Sheriff Sid Lockhart will most likely become the longest tenured sheriff in county history after being elected to a seventh term Tuesday.

In a race that wasn’t close, Lockhart, a Democrat, obtained 8,825 votes, or approximately 79 percent of the vote against Republican Chad Roberts. Roberts received 2,339 votes in the race.

Lockhart was with his family Tuesday night at Pizza D’Action in LaFayette to take in the election results. He said he was overwhelmed by the support he received from those who elected him.

“I can’t say enough about them,” he said. “I am very humbled for what they did.”

In January, Lockhart is set to tie the late James C. Morgan, who was Chambers County Sheriff for 24 years before Lockhart assumed the job in 1994. After the win Tuesday night, Lockhart is in line to surpass that timeline, but it doesn’t mean he’s ready to stop working.

“We are continuously looking for new technology to be better serve the citizens of Chambers County,” he said. “We hire the best deputies we can. They are well-trained and we are going to keep working hard for the citizens.”

During the campaign, Roberts said the number of unsolved murders in Chambers County was too high and he was best suited to put an end to the pattern.

On Tuesday night, Roberts was reached for comment by the newspaper but declined.

This was Roberts’ third attempt at the sheriff’s seat. In 2010, he was defeated by Lockhart. In 2014 he lost in the primary and this year, he fell once again to Lockhart in the general election.

Lockhart started his career in law enforcement in the sheriff reserves in the Chambers County Sheriff’s Department. He then moved on to the jail, then to Lanett as a police officer. When Valley incorporated in 1980, he took a job as an officer there.

During Lockhart’s time as sheriff, the department has gone through several changes. Lockhart said there has been a targeted focus on the drug problem in the county, which led to creating the Chambers County multi-jurisdictional drug task force. That team consists of officers from departments throughout the county.

Lockhart said the sheriff’s office will continue to be involved in public affairs, citing that he hates any public official who isn’t visible after election season.