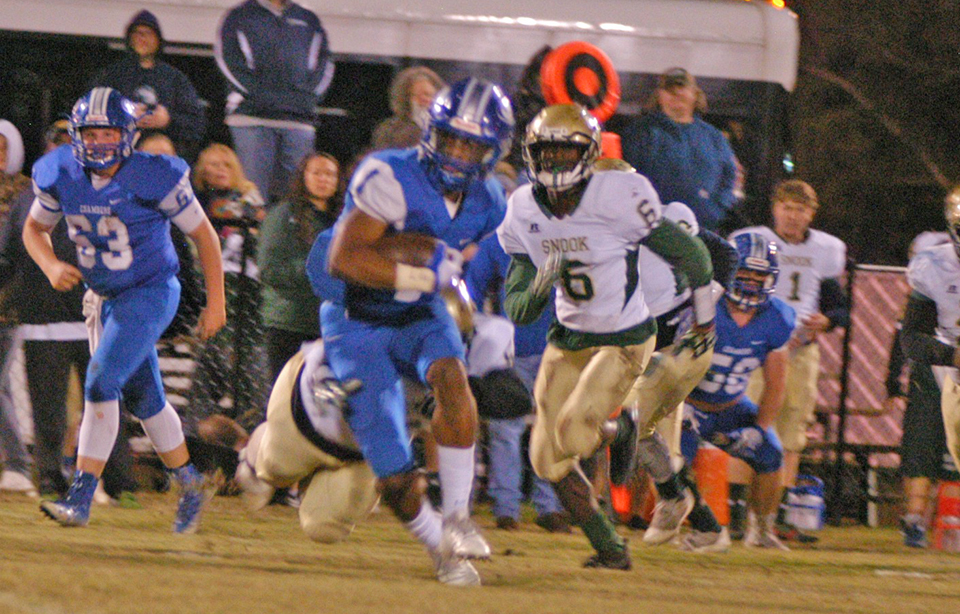 Wayne Clark | Times-News A BIG GAME FOR LYONS: In just one half of play, Chambers Academy senior running back C.J. Lyons had one of the best games of his career Friday night, running for 205 yards and scoring four touchdowns on just eight carries. Shown above on a 78-yard scoring run, Lyons boosted the Rebels to a 40-6 halftime lead. They’d add two more TDs in the second half to win 56-6. Chambers will be at home next Friday for a second-round playoff game versus Wilcox Academy.

LaFAYETTE — Senior running back C.J. Lyons was unstoppable, running for 205 yards and four touchdowns on just eight carries to propel the Chambers Academy Rebels to a 40-6 first half lead over the Snook Christian Academy Eagles. Chambers added two more second half scores to win going away, 56-6. The first round playoff win improves their record to 11-0 on the season and sets up a showdown game next Friday at Torbert Field versus Wilcox Academy, who won their first-round game 47-0 over Marengo.

The visitors from Foley did put a scare in the Rebels when they scored on their second possession to tie the game at 6-all early in the first quarter. Chambers was too much for them, though, outscoring them 34-0 over the remainder of the half to have the game well in hand by intermission.

The Eagles fumbled the ball away on the second play of the game. Braxton Allen recovered for Chambers,  putting the Rebel offense in great shape the first time they took the field, with the ball on the Snook 33. Three consecutive runs by Hayden Harris had the Rebels with a first-and-goal on the Snook nine. From there, Chambers was in the end zone in two plays. Eighth grade running back Gavin Kite ran it both times, scoring from one yard out to make it 6-0 Rebels with 9:54 left in the opening quarter. The point after was wide left leaving the score unchanged.

It didn’t take the visitors long to respond. On the first play following the kickoff, quarterback Kamaji Casey found wide out Ladarius Roper open on a go route down the far sideline. He aired out a perfect pass, Roper brought it in in full stride and streaked toward the end zone. Just like that, Snook had forced a 6-6 tie and would have taken the lead had Gavin Tooley’s extra point been good. The Rebel forward wall crashed through the line to block the kick, leaving the game 6-6 with 9:35 still showing in the first quarter.

From then on, it would be all Rebels.

Chambers put the ball in play on their 40 after fielding a pooch kick. On first down, Lyons ran for 19 yards off the right side of the line for a first down on the Snook 41. A pass interference penalty moved it 15 yards closer to the goal. Three running plays later, and it was first and goal on the nine. Braxton Allen then took a handoff off left guard and raced into the end zone to put Chambers ahead for good. A try for two points failed, and with 7:36 left in the first period the Rebels led 12-6.

After holding Snook on their next possession, Chambers put the ball in play on their 22. It would take them only one play to make it 18-6. Lyons took a handoff from quarterback Payton Allen and found plenty of running room off left guard. By the time he was in the secondary it was obvious that the only thing that could stop him was if he’d stumbled over his own feet. That didn’t happen, and 78 yards later Lyons would have the first of four first half touchdowns. The Rebels added two more points when Jordan Gillespie ran it on over right tackle on the conversion. With 2:22 left in the quarter, Chambers led 20-6.

On their next possession, Snook moved the ball past midfield, to the Chambers 42, before Hayden Harris and Dijon Darden teamed up to sack the quarterback for a big loss, forcing a punt.

Lyons’ fourth TD run of the half made it 38-6 in favor of Chambers. A pass from Allen to Gillespie added two more points on the conversion, making the score 40-6.

The clock ran continuously in the second half, but Chambers added two more scores in two possessions. A long pass from Allen to Caydon Smoot had them quickly inside the Snook 10 on their first possession of the second half. Hayden Harris ran through a big hole on the right side of the line to make it 46-6 with 9:39 left in the third quarter. That play worked so well they attempted it again on the conversion with the same result, boosting the score to 48-6.

Snook drove the ball inside the Chambers 30 on their next series only to have Jordan Gillespie snuff out the scoring opportunity with an interception at the Chambers 15. The Rebels then drove the ball 85 yards against an obviously exhausted defense to add one more score.

Backup players saw plenty of action in that series. Gavin Kite got his second TD of the game on a one-yard run with 1:44 left in the game. On the conversion, Rodriguez Darden caught a pass in the left corner of the end zone to pad the Chambers lead to 56-6.