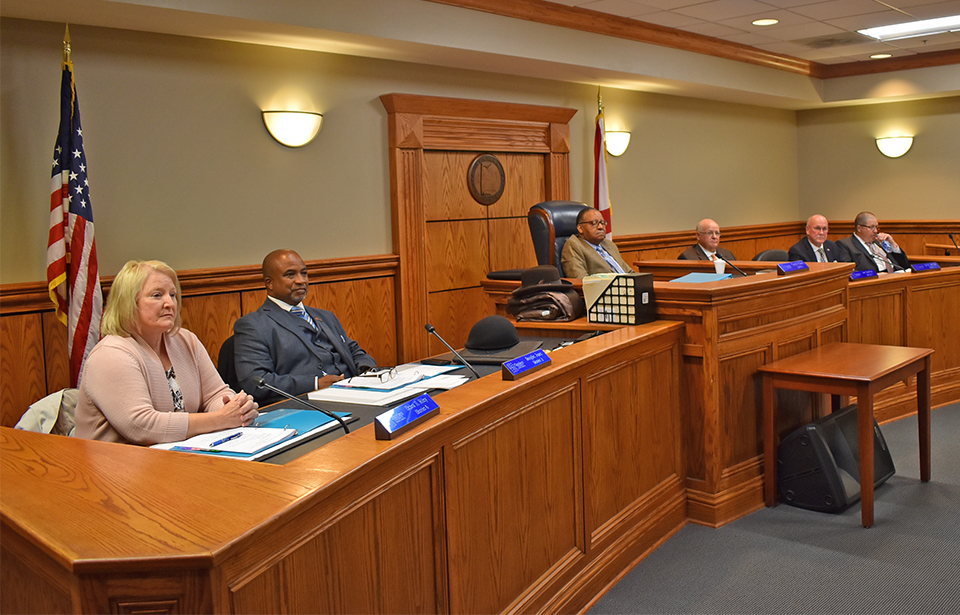 LaFAYETTE — At their first meeting following the Nov. 6 midterms, the Chambers County Commission swore in two new commissioners and one returning to the position.

In his first political race ever, Williams beat out incumbent Joe Blanks for the seat.

Returning to his seat representing District 5, David Eastridge was sworn in last. Shortly after he took the oath of office, the commission voted Eastridge in as the new commission chairman, a position held for the last year by District 1 commissioner Charlie Williams. Douglas Jones of District 2 was also voted in as vice chair.

Following these ceremonies, Eastridge called the meeting to order.

Commissioner Sam Bradford discussed two awards won recently by the Chambers County Development Authority for their “Strength Woven In” campaign. Winning the state award for small counties at the Association of County Commissioners and the International Economic Development Council bronze award, Bradford said he was happy with the direction the development authority is taking.

“That’s your tax dollars at work in promoting Chambers County,” he said.

In other actions, the commission discussed two issues regarding the County Commission Annex in Lanett.

A new sign outside of the annex has been a topic of discussion for the last few months, mostly due to the county receiving no bid offers for the work to be done on it. Finding a firm to create the eventual 8×5 sign was called a “journey” by Bradford. Finding a company to do the work is on the agenda for the commission’s next meeting on Monday, Nov. 19.

Also discussed was land adjacent to the annex that the commission is expected to purchase by the end of the month. The land, owned by Charter Bank who originally built the annex building, was almost bought by another party earlier this year.

“It kind of slowed them down when they found out there was a large drain underneath it,” Eastridge said. “It would not be substantial to hold a building up.”

McCoy explained that the bank has now made an offer to the county for them to purchase the land, which stretches along Highway 29 between the annex building and 6th street.

“Charter Bank has offered this property to the county commission for $39,780 which is a very modest sum considering the location and the ability for us to control who our neighbors could be,” he said. “This is a piece of property that I feel will be very valuable to our county in the future because it is right on Hwy 29.”