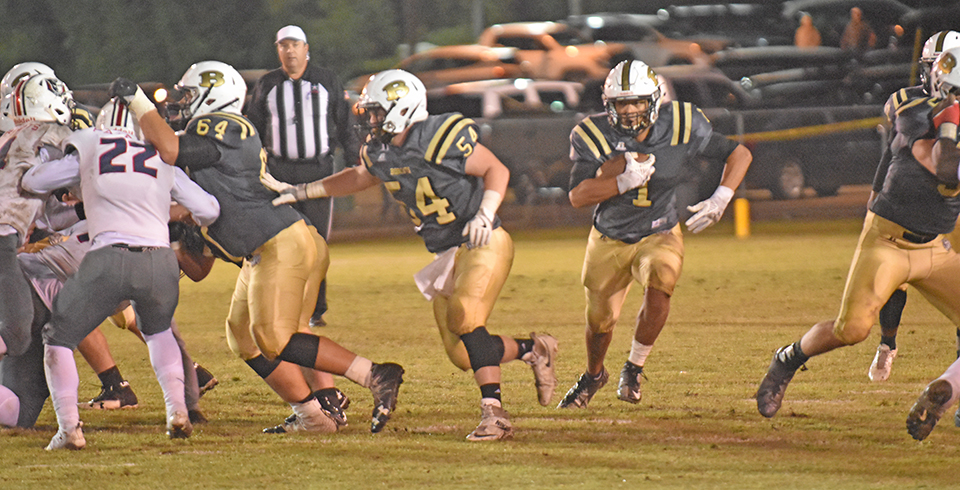 DOWDELL: Beulah senior running back Caden Dowdell has been one of the Bobcats’ main factors this season. Photo by Rashad Milligan

The time has finally come.

Beulah hosts its first playoff game since 1995 tonight against 8-2 Thomasville. The Bobcats are led by seniors Caden Dowdell and Lonzie Portis. Junior running backs Chris Person and Quin Page have also been key players who have emerged this season for Beulah.

Undefeated Chambers Academy is hosting 8-3 Wilcox in the AISA semifinal. The matchup is a battle of the stingy defenses as this season’s record-setting Rebels go against the Wildcats, who shut out Marengo Academy 47-0 in last week’s first round. Chambers’ defense is led by juniors Braxton Allen and Brody Smoot. On the offensive side of the ball, senior running back C.J. Lyons has been on a tear lately. In last week’s opening round win, Lyons rushed for 205 yards and four touchdowns.

LaFayette is going on the road to face 6-4 Geneva County. The Bulldogs ended the regular season with five consecutive wins, and have given up only 21 points in the last four games. This is the first season since 2015 that LaFayette opens the postseason on the road, that season the Bulldogs lost to Fyffe 50-15. The team has won every first-round matchup since the loss.

Top-ranked Lanett begins its quest to win back-to-back state titles, in as many classifications, tonight at home against 5-5 Florala.

The Panthers are led by junior quarterback Kristian Story and senior safety Trikweze Bridges. This past regular season, Bridges had 88 tackles, seven tackles for a loss, 10 forced fumbles, three fumble recoveries and eight interceptions, four of which were returned for touchdowns.

Bridges has 34 career interceptions, which is two away from the all-time state record. Story went 102-for-145 through the air for 1,828 passing yards in the regular season, completing 36 touchdown passes to only six interceptions. Junior athlete Quae Houston is the team’s second-leading rusher behind Story, rushing for 515 yards and 10 touchdowns in the regular season.

Valley is playing its first playoff game since 2013 at Briarwood tonight. The Rams are led by senior athletes Steven Coker and D.J. Dunn.

Freshman running back B.J. Baker has been an X-Factor for the team this season. Valley is 4-2 with Baker in the lineup, and are 1-3 on weeks without him on the field. Another Valley player to look out for tonight is senior kicker Daniel Etherton. Earlier this season, Etherton was named the Luis Zendejas Kicking Academy High School Kicker of the Week, which is a national honor that goes out to one athlete each week. Each score is magnified in the postseason, and if Valley has a chance at pulling off the upset, Etherton will be a key.

The Rams struggled in their regular season finale. Playing without starting quarterback Eli Culpepper for the majority of the night, Valley fell to Benjamin Russell and struggled to cross midfield on offense.

With Baker and Culpepper expected to play tonight, the team has a greater chance to advance the ball into field goal territory than the team did last week. Briarwood averaged more than 25 points per game this season and only scored seven points in its two losses.