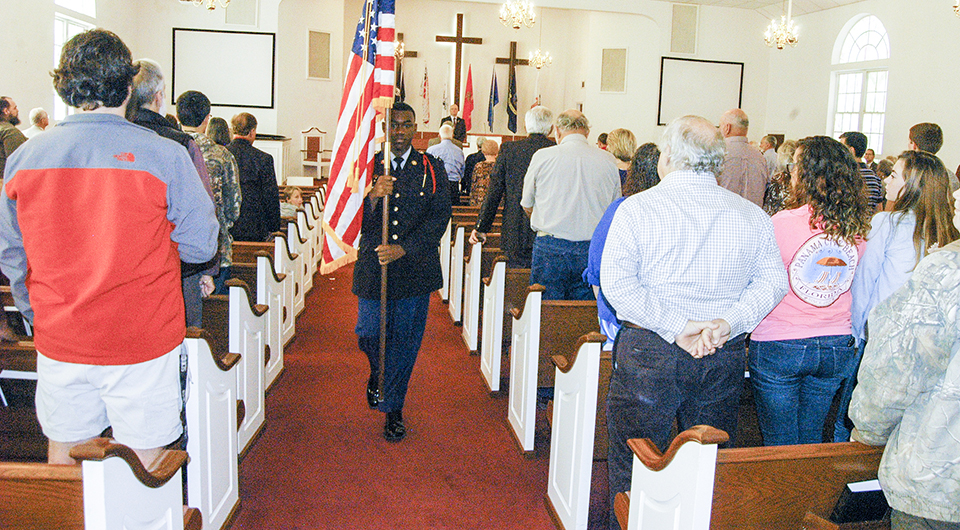 Sunday morning’s Veteran’s Day program at the Lanett Church of the Nazarene concluded with Lanett High JROTC cadets Bobby Moore and Tairrque Baker retiring the colors. Guest speaker Major Thomas M. Gorrell spoke about his experiences in being a chaplain for the U.S. Army.

LANETT — For the better part of two decades now, the Lanett Church of the Nazarene has hosted a Veteran’s Day program on the Sunday closest to Nov. 11. This year that day fell on an extra special Sunday. Nov. 11, 2018, marked the 100th anniversary of the end of World War I. On the 11th hour of the 11th day of the 11th month of that year, an armistice was signed to end the war to end all wars, or so it was called at the time.

More than two dozen local veterans from five branches of service were in attendance for the 11 a.m. Sunday morning service. They witnessed the presentation of colors by the Lanett High ROTC cadets and joined with the congregation in reciting the Pledge of Allegiance and singing the national anthem. The Rev. Kent Pelton urged everyone to thank a veteran for his or her service whenever they met one.

“I think that will mean more to them than anything else you can do,” he said. “They will appreciate your taking the time to do it.”

The three local mayors – Leonard Riley from Valley, Steve Tramell from West Point and Kyle McCoy of Lanett – were there to recognize local veterans on behalf of their respective cities.

Mayor Riley said he’d had some really good friends among World War II veterans. He said that the Langdale Methodist Church had hosted a reception earlier in the day for WW II vet Kimbrell Barefield, who celebrated his 98th birthday that day.

“John Lyons is another good friend of mine,” he said. “He will be 97 in January. I’ve had coffee and breakfast for years with there men. Two other veterans of World War II, Marshall Lane and Bogey Bell, were good friends of mine. Marshall died about four years ago and Bogey died around 10 years ago. Bogey really helped us with the school system. Any time we needed to know where there was a water line going to a school he could tell us where it was.”

Riley said that freedom of religion had been one of America’s most cherished liberties. He said that every American can thank veterans for maintaining all of our freedoms. “May God bless all our service members, whether active or retired, and may God bless America,” he said.

Tramell said that it meant a lot to him that the Nazarene Church hosted this program every year.

“I’ve come a long way from another state to be here this morning,” he said, getting lots of laughter. “I want to present a proclamation to you thanking you for honoring veterans this way.”

Bobby Elliott, adjutant for American Legion Post 67, thanked the church for hosting these programs for the better portion of 20 years.

“I want to thank you, Rev. Pelton, Gerald Brumbeloe and his staff for organizing this every year. On behalf of more than two million members of the American Legion, we thank you.”

“They would have been here today, but they had transportation problems,” he said lightheartedly.

Each year, the church has a presentation of flags ceremony. While the flag for each branch of service is taken to the front of the church and posted, a familiar song for that branch is played while veterans from that branch stand for some recognition.

Dave Batty carried the flag for the Army while “The Caissons Go Rolling Along” played. Todd Nolin carried the Naval flag while “Anchors Aweigh” played. Wayne Belcher was the flag bearer for the Air Force flag and marched in to the strains of “Off We Go Into the Wild Blue Yonder.” Bobby Pike toted the Marine Corps flag while The Marine Corps Hymn played, and Chrystal Smith carried in the Coast Guard flag as the Coast Guard flag played. Tommy Smith brought in the flag for the National Guard, and Tim Procise had the one for POWs/MIAs.

The speaker of the day was Major Thomas M. Gorrell, a chaplain for the U.S. Army who’s currently based at Fort Benning.

Gorrell was a minister in the Nazarene church in the late 1990s before being led to being a chaplain.

He was leaning toward being with the Navy before his wife prevailed on him to be with the Army because they weren’t as likely to be deployed to far distant locations.

That was before 9-11, and since then the Gorrells have been sent to Germany, Kosovo, Qatar and Iraq before getting back to the states for his current assignment at Fort Benning.

Gorrell said he’s seen many signs over the years that convinced him that he was doing what God wanted him to do.

“When God is behind something, things happen fast,” he said. “When I was ordered to Fort Polk, Louisiana. we were given six weeks to sell our house,” he said. “The last time the house was sold it took over two years to do it. We did it in two-and-a-half weeks.”

Gorrell likened his life’s journey to that of Gideon in the Book of Judges.

A poor, humble farmer, Gideon was chosen by God to defend Israel against an overwhelming threat posed by the enemy.

He lacked confidence at first, but after placing absolute trust in God, attained that goal despite being outnumbered more than four-to-one by the enemy.

Gorrell noted that only around 1 percent of Americans are on active duty at any given point in time.

“That 1 percent does a lot for the remaining 99 percent,” he said. “Our nation is what it is today because of what our veterans did in the past and because of those who are serving today.”

Toward the end of his talk, Gorrell asked for veterans at the service to stand. A little more than two dozen men stood up.

“God always loves you,” he said. “I pray that God will heal whatever affliction you may have and will help you with any problem you may have.”

The program concluded with the Rev. Pelton thanking all veterans for answering the call to duty and playing a part in keeping the country the great place it is to live.