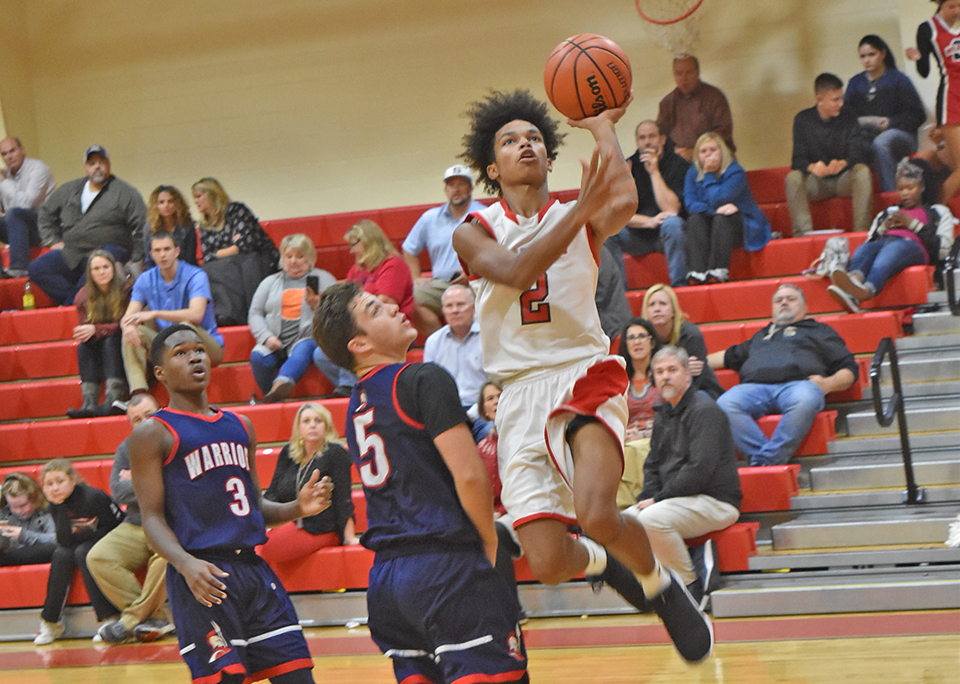 BALL IS BACK: Springwood junior guard Louis Morrison goes up for a shot around the basket during the second half against Oak Mountain Academy. Tuesday night marked the first game of the season for the Springwood boys basketball team. Photo by Rashad Milligan

LANETT — Experience proved to be the difference Springwood and Oak Mountain’s boys and girls basketball teams on Tuesday evening. Both of the Wildcats’ varsity squads lost by double digits, with the girls losing 46-27 and the boys losing 56-28.

“I have to give a lot of credit to Oak Mountain,” Springwood head girls basketball coach Rick Johnson said. “I thought they executed very well. They have five seniors on their team, [with] all five of them starting and very experienced. [Oak Mountain head basketball] Coach [Terrell] Barkley does a good job with his team, and with our inexperience, I thought they exploited some of that tonight.”

Oak Mountain began to challenge the Springwood offense with a full court press at the start of the second half. The Warriors were led by senior center Christian Pollard, who rebounded and even brought back up the ball for Oak Mountain on some possessions. She finished Tuesday night’s win with a team-high of 18 points. Last season, Pollard was named an all-state selection in the GISA.

In contrast, the Wildcats only have one senior, Dee Williams, on the roster this season. Tuesday marked Springwood’s first loss of the season, after picking up two road wins last week. The team is led by junior McKayla Barber, who did a decent job of controlling Springwood’s pace on the offensive end of the floor against Oak Mountain.

“I think we produced nine points in the second half,” Johnson said. “[It’s] pretty hard to win a high school basketball game when you aren’t producing. Maybe our legs got tired a little bit, we might have gotten winded. They [Oak Mountain] were scoring on good, solid post possessions inside and were taking advantage of their size, but we’ll learn from it. We know there’s a lot of basketball to play, and on [Wednesday] we’ll come in to get better, and will try to get prepared for East Memorial on Thursday.”

The boys team came out fired up to the “Mo Bamba” instrumental, which is the current hip-hop phenomenon playing at sporting events across the country. After starting lineups, a player yelled “let’s go!” in anticipation of the opening jump ball.

“It was good to see the guys get out there and play against another team,” Springwood boys head basketball coach Drew Dorsey said. “We did see some bad things, which you see in first games. You get through the first game jitters, you see what you have to work on, but we also did a lot of good things, too. We’re going to focus on eliminating the bad, and focus on continuing to do the good.”

Bryant Teel, Coleman Hull and Louis Morrison were a couple of the Springwood standouts from the game. The Wildcats kept the game competitive through the middle of the third quarter when Oak Mountain began to pull away. Turnovers on the offensive end and apparent excessive fouling hindered Springwood down the stretch.

The Warriors were led by sophomore big man Zack Vavrik, who scored 22 points, and almost flushed down a vicious dunk in the second half. Oak Mountain stayed in a 2-3 zone defensively for the majority of the night. The final sub for the Warriors came with 4:17 left in the game when the team was up 50-24. The crowd was amused when a Warriors’ pass went in the basket for two with little over two minutes remaining in the game.

Springwood is replacing five senior starters from last season’s team who all played substantial minutes, Dorsey said. Chemistry is something this year’s squad will have to focus on early on.

“A lot of those guys have been playing a lot of minutes, or have been starting since they were freshmen,” Dorsey said. “Having to replace those five guys is tough. When all of that talent and experience goes out the door, and you’re left with guys who don’t have that experience, [it’s tough], but they’re ready. We’re going to work in practice [Wednesday], and as I said earlier, there are some of the things that we need to quit doing, and some things that we need to do more.”