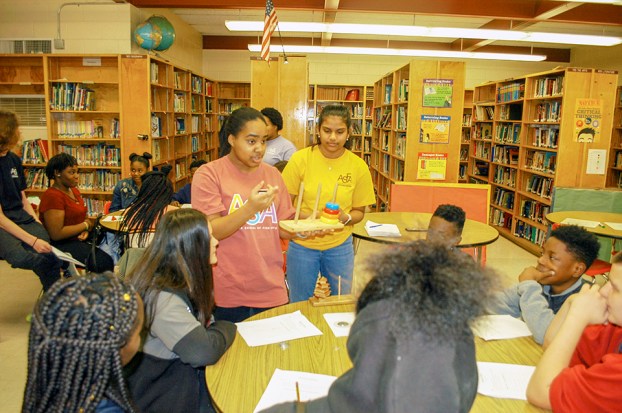 “At Five Points, we have a super strong emphasis on STEM education,” said eighth grade science and math teacher Mary Ann Spence. “It’s similar to what’s going on at the Career Technical Center. We have 3D printers, robotics and other cutting-edge tools.”

Spence and fellow Five Points teachers Yolanda Jones and Jill Romine worked with ASFA instructors Hungsin Chen, Jameson Ware and Cecil Flournoy in taking the students through numerous STEM-related exercises. Chen is chair of the school’s math and science programs. Ware is a biology, chemistry and environmental sciences instructor and Flournoy is a math teacher.

Three work stations were set up in the school’s home economics building and two more in a classroom area.

The symposium lasted approximately two-and-a-half hours, and each student had the opportunity to take part in five separate work stations. In the math section, they could work together to figure out such brain teaser games at the Tower of Hanoi and the Seven Bridges of Konigsberg.

In the Tower of Hanoi, they could use math principles to find the most efficient way to stack pillars. In the Seven Bridges of Konigsberg, they solved the problem of finding a way to cross seven bridges without crossing the same one twice.

WEST POINT — Friday afternoon marks the start of the last chance for the many senior seniors on the Point... read more