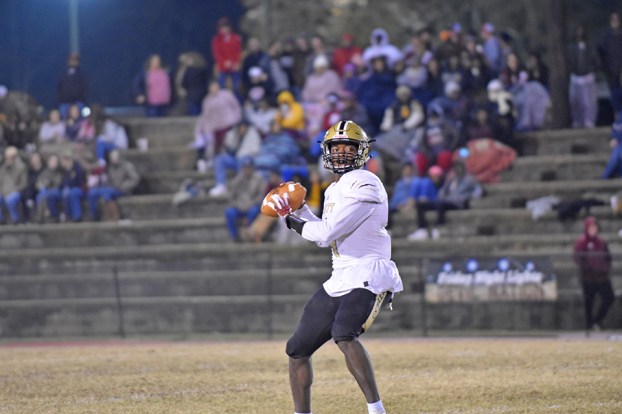 DROP BACK: Lanett junior quarterback Kristian Story drops back and surveys the field during the first half against Maplesville. Photo by Rashad Milligan

LANETT — The honors continue piling up for Kristian Story.

“You want your leaders to do the right thing and to put themselves in position to receive these accolades because that lets me know that he’s putting the numbers up on the field,” Lanett head football coach Clifford Story, Jr. said. “I’m proud of him. He’s done the things that we’ve asked him to do as far as getting better as a quarterback and as an athlete. He really pushed himself this summer to put himself in this position. As his coach, I’m proud of him because he took the negatives, along with the positives, and worked on the phases of the game that he needed to work on.”

Also ranked the No. 1 athlete in Alabama for 2020 recruits, Story is listed as an athlete on the All-American team. Story being labeled an athlete stemmed from his performance at regional camps lined up at wide receiver and defensive back. This past season under the gun for the Panthers, Story completed 102-of-145 passes for 1,828 yards, 36 touchdowns and 6 interceptions in nine regular season games. He also led the team in rushing, gaining 839 yards and 15 touchdowns on the ground in the regular season for Lanett.

Story was recently named one of three finalists for the Alabama Sports Writers Association (ASWA)’s Back of the Year for Class 1A. The last local player to win the honor was former LaFayette High School athlete JaTarvious Whitlow.

“That speaks volumes for not only our program and his supporting cast, but for him as well,” Coach Story said about the nomination. “He has worked his butt off. He has really done what he was supposed to do to be elite, and that’s what we preach around here is being elite. He takes heed to the things that we tell him of what he needs to do to be successful, and  he’ll work on it. Anybody will tell you that he doesn’t take shortcuts, he pushes himself in the weight room and on the field to be a leader for the younger generation and his younger brother Caden.”

“Even when he was little, he would always want to race the fastest person, because he always felt like he could beat them,” Coach Story said. “When we started going on the [football camp] circuit as far as Rivals, Nike, Under Armour, he wanted to go up against the best. We went up to Atlanta, he went up against the No. 1 receiver in the state of Georgia, and he held his own against him.”

In the recruiting world, the four-star prospect is weighing his options before making a hard commitment next summer before his senior season begins, Coach Story said. Story originally committed to the University of Tennessee as a sophomore before opening up his recruitment during the 2018 season.

“Wherever he commits to this summer will be the final [decision],” Coach Story said. “There won’t be any  decommitting, or any of those things, because it’s going to be well thought out, well-planned.”

Coach Story said that he is proud of his son and all of his accomplishments up to date, and that his possibilities for college are brought up often when the two talk about the game.

“When the teams for the College Football Playoff came out, I asked him, ‘hey son, you ever thought about something?’” Coach Story said. “He said, ‘what’s that, dad?’ I said that ‘you have Alabama, Notre Dame and Clemson. Three of the four schools that are competing for the championship all have you high on their radar. That’s very unique.’”

The banquet awarding the ASWA state players of the year is on Jan. 15 at the Renaissance in Montgomery.

Lanett gets bounce back 67-59 win against LaFayette

LANETT — It didn’t take long for the Lanett boys basketball team to get back to its winning ways after... read more