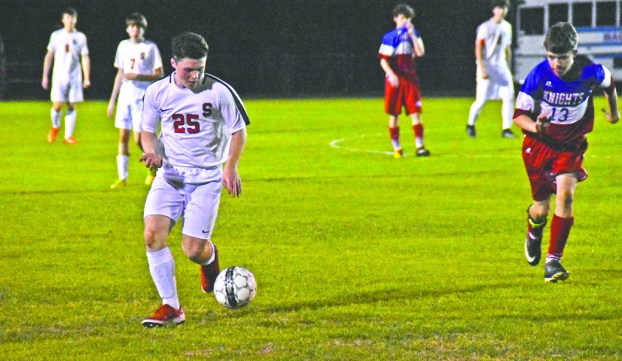 LANETT — The Springwood varsity boys soccer team began practice on Monday afternoon. This season marks the second year the Wildcats have had the program back at the school.

“It was a good practice,” Springwood soccer head coach John Lanier said. “The good thing about this year is that we have a lot of guys coming back from last season. Last year, it was a lot about trying to find positions for people and where they fit in. We don’t really have that issue this year.”

The Wildcats lost three seniors starting along the defensive back line, with the rest of the key players including sophomore Kannon Key and junior Coleman Hull returning this season. Hull finished the 2018 year with 17 goals.

In Springwood’s first season with soccer returning after a hiatus, the Wildcats went 5-5 and made the AISA playoffs as a No. 3 seed before losing to eventual champion Autauga Academy 3-1. Springwood trailed by a goal for most of the second half before Autauga struck a late clincher in the postseason loss.

“It’s really exciting to see the growth of [our program],” Lanier said. “It’s a good foundation year, we made the playoffs last year, and I think that we can go very far. [Last year], we were in every single game, even the ones we lost. With another year of experience, I think we can compete with anybody.”

The team’s strengths come on the defensive end of the field.

“We played fantastic defense,” Lanier said. “We were very well organized, it was hard for teams to break us down. Even when we were not scoring as much, our defense kept us in games. That was our strength, and a lot of that had to do with our assistant coaches last year.”

Lanier’s assistant coaches are current players from the men’s soccer team at Point. Last season, seniors Jacob Price and Hugo Marques were on the staff. Price is a goalkeeper from the United Kingdom, while Marques is a center back from Brazil.

Lanier works at Point as the director of student accounts. The Lanett native graduated from Springwood before spending five years in Kansas working at the Wichita Technical Institute. Upon learning about Point’s move to the Greater Valley Area, Lanier came back home and has followed his passion for the game through the Skyhawks ever since.

“I talked to [Springwood athletic director] Coach [Drew] Dorsey, and he asked me if I wanted to become the head coach,” Lanier said. “I love the school. I love the people. I’m from here, so it was definitely something that I wanted to do.”

The Wildcats kick off the 2019 season in February and will play through April.