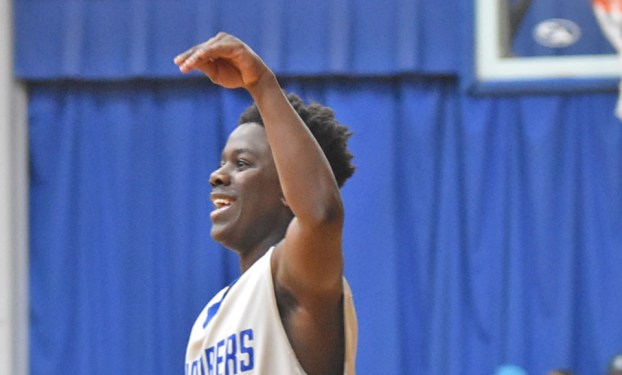 ONE MORE: Chambers Academy senior Rodricqus Dark cracks a smile as he. watches his three-pointer go in during the first half against Edgewood on Friday night. Photo by Rashad Milligan

LaFAYETTE — The Chambers Academy boys basketball team pulled out a 52-49 victory over Edgewood at home on Friday night.

“Our guys played with passion and heart,” Chambers boys head basketball coach Jason Allen said. “They defended their home court the way I challenged them before the game. No one comes in here and pushes us around, I know that’s a cliche, but this is our house. Our guys proved that we’re contenders. That was an Edgewood team that I believe is ranked in the top 5 at 19-4 in Class 2A, and that was a huge win. A total team effort, I thought we really won the game on the boards.”

Six Rebels scored in the victory led Raphe Daniel who finished with 19 points and 13 rebounds.

“He was a man on the boards,” Allen said of Daniel. “He dominated the game inside, and that was a big difference in the win.”

Seniors Austin Sluder, Rodricqus Dark and Colton Hand were honored prior to the matchup for Senior Night. Sluder had 5 points, Dark had 8 points and Hand finished with 4 points.

“I’m proud of them,” Allen said. “It’s a total team effort. Payton [Allen] is not going to be the guy every night, we need other guys to step up. When everybody scores and contributes, we’re a lot better basketball team.”

Payton Allen finished second on the team with 13 points. Hunter Wade also got on the board for the Rebels.

During halftime of the varsity girls game, the first ever Chambers Academy basketball team was recognized for the school’s 50th anniversary. Five players from the 1969 team and head basketball coach Gene McDonald were present to be acknowledged.

“It’s a pretty neat deal,” former Rebels forward and Friday night honoree Eddie Adams said. “We’ve wanted to do this for a long time, we’ve talked about getting back together, and to do it was a neat experience. What Gene McDonald did for us, working a job all day and then coach us, it’s really a blessing to have him here.”

Adams also said that the team often traveled to Valley to practice, as they didn’t have a gym or much of a campus in Chambers Academy’s first year of existence. That team’s first win that season was against Edgewood as well.

McDonald and Allen delivered the game ball to the referees before tipoff of the boys game on Friday night. Allen said that he and McDonald attend the same church.

Chambers Academy has two more games before that start of postseason play next week.

LaFAYETTE — The Chambers Academy girls varsity basketball team ran out of gas in a 37-23 loss to Edgewood on... read more