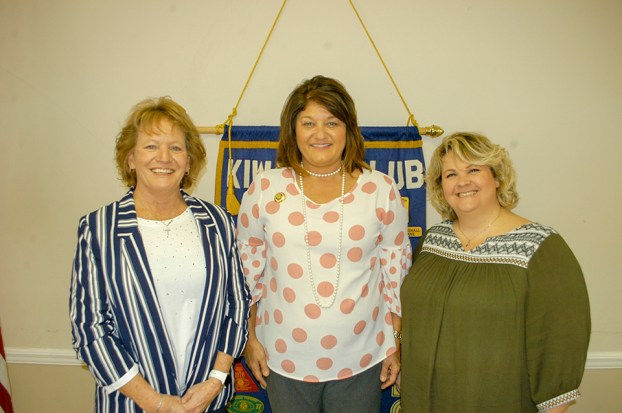 VALLEY — State Rep. Debbie Wood was the guest speaker at Wednesday’s noon hour meeting of the Kiwanis Club of Valley and talked about being part of a new look in the Alabama Legislature.

Wood is one of 23 freshman legislators in the 105-member Alabama House of Representatives. Twelve of the state’s 35 senators are freshmen as well. That number includes District 13 senator Randy Price, who has Chambers County in the area of east-central Alabama he represents.

“It’s one of the largest freshman classes ever,” Wood said. “I know if I have an issue I can contact Bob Fincher, who’s in his second term. He has a large part of Chambers County in his district.”

Wood has been spending a great deal of time in Montgomery, learning the ropes before this year’s session begins in March. She’s a member of the Ways and Means Education, County and Municipal Government and Urban and Rural Development committees. She was recently named a deputy whip for the House Republican Caucus. As a new debut whip, Wood’s job will be to secure the votes needed to pass legislation.

They must have thought she had backbone when she spoke up at a meeting to cite the need for more funding for infrastructure.

That’s not much when Chambers County has 500 miles of roads to maintain.

“DOT needs to understand our needs,” she said. “There are some specific projects we need to address. We have bridges school buses can’t cross. They have to detour around them. This means higher transportation costs and more time on the bus for the students. There are also buses ambulances can’t cross. That’s not good.”

She said that she and husband Bobby couldn’t live today on what they were making in 1992, the last time Alabama had a gas tax increase.

“Everything is more expensive now than it was back then,” she said. “That goes for road paving, too. If we don’t fix our infrastructure, we won’t get new industry and the new jobs that come with it. Every surrounding state has increased their gas taxes since then. They have more money to spend on their infrastructure, and this puts them in a more competitive position than what we are in. We can’t just sit back and do nothing and die as a state.”

Wood expects a transportation bill to be one of the principal topics of discussion in the 2019 session, along with prisons and mental health. The lion’s share of money the state spends every year goes to public education. She said that it’s numbing to hear the kinds of numbers that go with education spending. As a county commissioner, she was accustomed to hearing county departments say they might need an additional $30,000 for the next year. A department with the State Department of Education might say they need an extra $50 million. The state’s biggest pot of money, the Education Trust Fund, is in the hundreds of millions.

“I spent this past weekend in Birmingham at an education symposium, listening to the needs of education,” she said. “It was good to get together with other people about issues. The main thing for me is for the dollars to reach the students.”

She said some changes needed to be made when it comes to test scores.

“If a school has so many absences, it can drop their test scores,” she said. “This is true even if the absences are excused and if they student is away visiting a college they are interested in attending,”

One benefit of a continuing strong economy is that Medicaid spending is dropping. That’s because more people are working and have private insurance.

“We’ve been looking at expanding Medicaid in Alabama,” Wood said. “As long as the federal government pays 90 percent of it, it’s not a bad arrangement, but what if they drop their share to 50 percent and expect us to pay the other half?”

“This is what happens when unemployment is as low as it is right now,” Wood said. “Too few people are applying for the openings, especially at prisons. Mental health is a big problem. We are under a federal mandate to do more for mental health. If we don’t meet certain benchmarks we could lose federal funding, and we don’t need for that to happen.”

A serious issue with state prisons is over capacity. This could mean the release of more non-violent offenders in the coming years.

“We are struggling to do what we can without prisons,” Wood said.

Not all is doom and gloom.

“We have more money to spend than we ever have,” Wood said, a factor in this being the Amazon online tax. Alabama was the first state in the union to do this. Other states are lining up to see what Alabama did.

“We need to figure out how to spend it,” Wood said. “We need to avoid having unsustainable programs.”

Wood has been going through a learning experience in Montgomery. Prior to being elected, she said she had gotten a bad impression while watching legislative sessions in action while visiting the state capital. She thought it rude for legislators to ignore someone who was speaking, preferring to speak to other legislators. Many times this is happening, she said, the person speaking may be talking about something that has nothing to do with business at hand.

“It’s hard to sit there and listen to a filibuster that goes on and on,” she said. “It’s grandstanding, and they are just trying to get their name out there for the media present.”

Wood’s office is on the fifth floor of the State House.

“That’s not bad,” she said. “It’s the same floor the House chamber is on.”

One big change this year is that lobbyists have been roped off. They can’t intermingle with legislators and have to wait until they are asked for. Wood said that some internships are available and that any interested young person could contact her office at (334) 261-9532 to apply. There’s also opportunities for prospective pages. These spots are available for those who are in the 12-17 age group.

The next session starts on March 5 and will probably continue until early June. Major legislation that hasn’t been approved by then could be decided in a special session.

Intersection to be named in memory of U.S. Army Sergeant

By Alicia B. Hill The Valley Times-News On Tuesday, the Troup County Board of Commissioners honored the life of Sgt.... read more