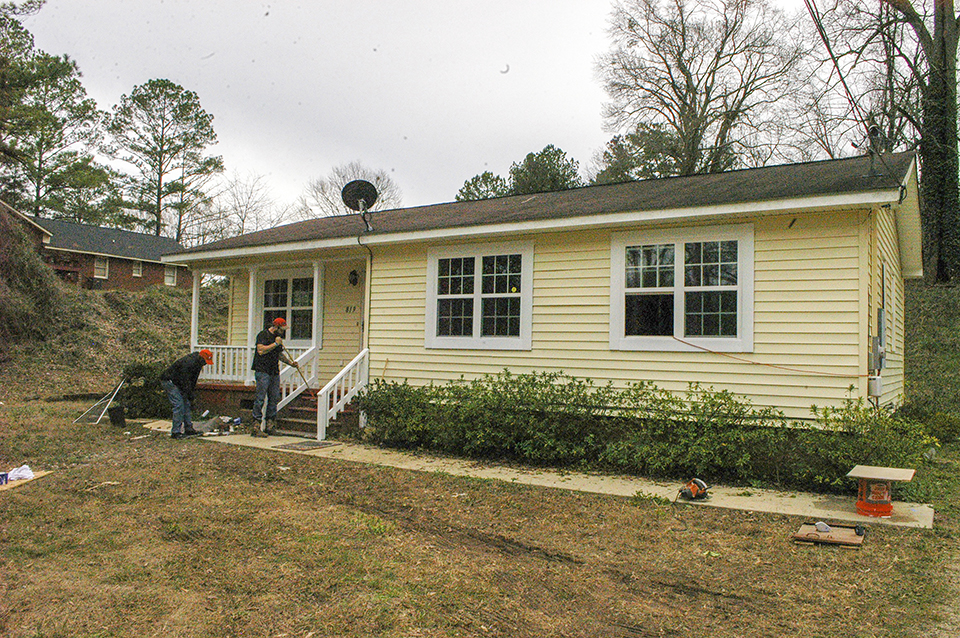 The house of North 10th Street in Lanett is being rehabbed by the Chattahoochee Fuller Center Project and should be finished by the end of next week.

LANETT — The Chattahoochee Fuller Center Project (CFCP) had a busy year in 2018, with four new homes being built. No new homes are planned for construction this year, but the organization will be working with volunteers to flip some local houses and with college students to clean up some local neighborhoods. Though no new home building is planned for 2019, there will be one ambitious construction project taking place.

A new ReUse Store will be going up on one of the vacant parking lots across from the Lanett Mill site.

“We’ll break ground in April for the new store,” said CFCP Executive Director Kim Roberts. “We will have been in our current location for five years this April. We’ve outgrown it. Business has been very good since we opened in 2014. We have gotten so many donations, and a lot of local families have been blessed through this store.”

Roberts said that at the start, she had no idea things would go so well with the store and is highly optimistic things will be even better at the new location, which will be between the El Rio Mexican Restaurant and the Chambers County Courthouse Lanett site.

She credits former CFCP President Bill Scott with the great idea of starting the store.

“It was his dream,” Roberts said. “I followed that dream, and it’s been very good for the community. People are picking up and dropping off every day.”

Roberts remembers the building looking so big and empty when the ReUse Store first opened. “I told Mr. Bill that we’ll never fill it up, but we did, and now we need more space,” she said.

The new location will be similar in size to the current building. “It will be 8,000 to 10,000 square feet,” Roberts said. “The big difference is that it will be more like a warehouse. Our current location has lots of walls and doors, which limit your space.”

“He’s so good with construction,” Roberts said. “I don’t know what we’d do without him. He loves new projects. I’ve never known anyone else who can get so much done.”

While the new ReUse Store will start going up in April, the CFCP will be plenty busy before then.

“We’re taking part in flipping two houses this month,” Roberts said. “One of them is on North 10th Street in Lanett. We’re working on it now, and it should be ready for a new family on Feb. 22. The next day we’ll help Refuge Point Church flip a house on Avenue K in West Point. I think it’s great what they are doing. They’re preparing a new residence for Mr. Willie, a blind man who’s well known and well thought of.”

On March 3, fifteen students from Wittenberg University in Springfield, Ohio will be here. “They will help us paint the outside of Terrence Lovelace’s house in the Waterworks section of West Point,” Roberts said. “Terrence is one of our home owners and is confined to a wheelchair.”

On March 9, approximately 100 team members from KMMG will meet at the Virginia Cook Activity Center on MLK Drive in West Point and will be cleaning up a nearby neighborhood.

“Mayor Tramell will be heading it up,” Roberts said. “We know they are good workers since they’re with Kia. They will be picking up litter and cleaning up yards. They may also do some house painting and porch repairs.”

On March 29, Point University will be doing an Impact Day in the Roper Heights neighborhood in West Point.

“Pastor Eddie Striblin and members of the Roper Heights Baptist Church will allow us to use their fellowship hall for signing in and for lunch,” Roberts said. “We’ll do a lot of yard work that day in the neighborhood surrounding the church.”

Impact Days provide a great way for Point University students, teachers and staff to get to know West Point residents who live a short distance away from the Point campus in the downtown area.