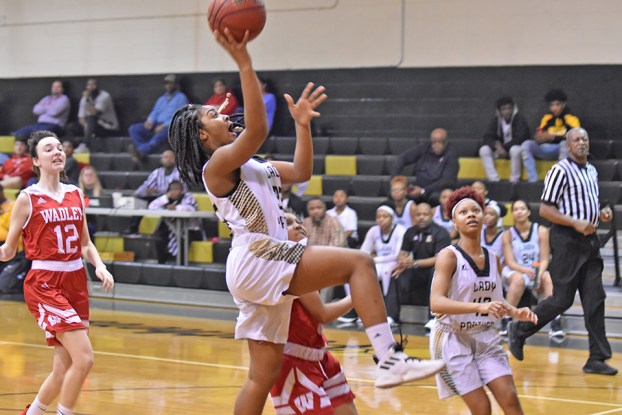 Rashad Milligan | Times-News STAYING AGGRESSIVE: Lanett eighth-grader Jakiyah Little goes up for a lay up against Wadley in the first round of the area tournament on Monday night.

LANETT — The Panthers breezed through round one of the 1A Area 6 tournament on Monday night with a 43-15 win over Wadley.

“We came out with energy. We tried to put the game away early, and that’s what we did,” Lanett girls head basketball coach Charlie Williams said.

The win clinched a top-two finish in the tournament for Lanett, which secures a spot in the state bracket.

“Alyse Madden stepped up big tonight,” Williams said. “She made some great passes, ran the floor, finished layups, and that’s what you need. If one person goes down, the next person has to step up.”

Lanett played most of the second half with a group of all junior high students on the floor. The Panthers outscored Wadley 17-9 in the third and fourth quarters.

“They’re not middle schoolers anymore,” Williams said. “When they played their first varsity game, that was it for them being middle schoolers. They’ve been practicing with us for a while now, and they’ve pretty much got the rhythm.”

Many fast break opportunities broke out for the Panthers as a result of forcing turnovers defensively. Madden’s decision-making looking up the floor was also key for Lanett either getting to the free throw line or transition layups on the break, Williams said.

“I’ve been at this stage before,” Williams said. “I’m trying to get to the next level and the next level. One game at a time, [you] can’t have bad nights or bad games.”

Moving forward, the inexperience of the Panthers’ bench is what concerns Williams the most, but he said that he’s grateful to have seniors on the team to lead them along the way this postseason.

LaFAYETTE — The Chambers Academy boys basketball team pulled out a 52-49 victory over Edgewood at home on Friday night.... read more