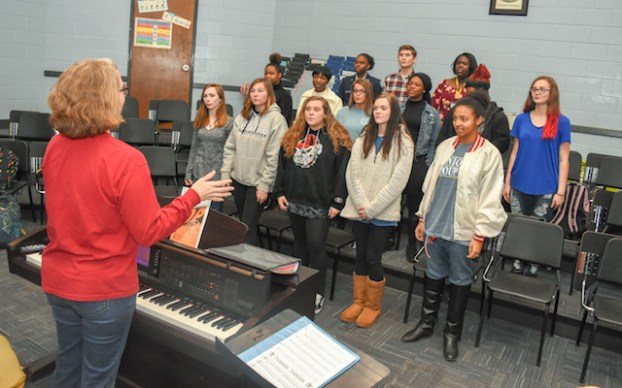 Local students to be featured in Super Bowl commercial

Students and faculty from Troup High School were filmed in December for Kia’s “The Great Unknowns – What if” commercial that will air Sunday night. Although it’s unclear what will air in the actual commercial, two of the students have already been featured in a teaser to the ad.

“I got a message from one of my best friends, who was like ‘I just saw your face and Grant’s face on TV,” said Troup High senior Kayle Dalton.

Dalton and junior Grant Thrailkill are featured in the teaser for the ad, which Kia released two weeks ago. The teaser shows faces on television screens, but no celebrities, which is the basis of the entire commercial.

About 40 students and Troup High Choir Director Kathy Kirby were filmed, but it’s been unclear to Kirby and students how the filming would be used. They knew it could be used in a 30-minute documentary or in a commercial, although they didn’t think it would air in anything as large as the Super Bowl.

“They came in and transformed this whole school,” Kirby said of the film crew. “There were probably 60 crew members and they took over the entire parking lot and the auditorium.”

There were three scenes filmed at the school — the trophy hall scene, prom scene and the chorus scene. Thrailkill enjoyed the prom scene, which he was featured prominently in.

“They got us all dressed up. I was wearing a blue vest with a white shirt and white pants and checkerboard Vans,” Thrailkill said. “Those Vans were amazing. They told me I could have the Vans if I ran down the hall.”

Thrailkill also participated in a voiceover for the commercial.

Most of the students participated in the chorus room shot, where Kirby was leading the students singing on stage.

The point of the commercial appears to be a focus on everyday people, rather than celebrities. With the commercial teaser unveil, Kia released information on the “Great Unknown Scholarship,” which it says will “help young people in need get a foothold in higher education.”

The Super Bowl regularly draws over 100 million viewers and is usually the most watched event in the United States each year.

“I’m excited. It’s a once-in-a-lifetime thing for us,” Dalton said.

Kirby said they were told the commercial would air during the third quarter. Sunday’s game between the New England Patriots and Los Angeles Rams airs at 6:30 p.m. on CBS.

LaFAYETTE — The Chambers Academy boys basketball team pulled out a 52-49 victory over Edgewood at home on Friday night.... read more