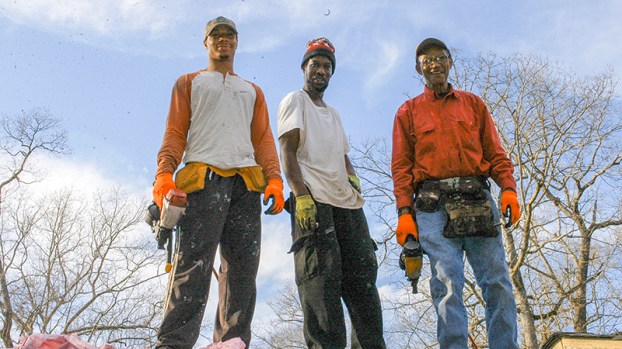 On Thursday, Cecil Ramsey and his crew put a new roof on the home of Tommy Miles, a former West Point police officer. The Chattahoochee Fuller Center Project provided the materials and Ramsey (at right), grandson Nic Ramsey and DeShawn Brooks (at center) did the work at no cost. Miles is disabled, and his roof had a number of leaks. --Wayne Clark

WEST POINT — A retired West Point police officer has gotten some much-needed help with some home repair thanks to a cooperative effort on the part of the Chattahoochee Fuller Center Project, the West Point First United Methodist Church, Mayor Steve Tramell and Cecil Ramsey and his roofing crew.

The former officer, Tommy Miles, is getting a new roof on his home, which is located approximately one mile north of town on Highway 29.

“I want everyone who had anything to do with this to know that I appreciate it from the bottom of my heart,” Miles said Thursday afternoon as Ramsey and his crew were putting the finishing touches on a new roof.

CFCP Executive Director Kim Roberts said the roof had been leaking in a number of places and that a new roof was the only solution for the home to be livable.

“We got to know Mr. Miles and his son Jeff through Helen Zachry,” Roberts said. “She’s with a meals on wheels program and told us about the conditions inside the home. We knew we had to do something.”

Miles is 77 years old, and gets about the house with the aid of a walker. He seldom goes outside. His son, Jeff, is confined to the house due to an illness.

Miles said West Point and the surrounding area is a special place, where neighbors help neighbors. He’s lived north of town his entire life and worked with the West Point Police Department from 1966 until 1991, when he had to retire after having a heart attack.

“Harvey Thompson hired me,” he said. “He was the police chief in West Point at the time and a really good man. They didn’t come better than him. West Point has always been good to me, and I was glad to be able to work for the city on the police force.”

A new roof for the Miles home is the first of many projects the CFCP will be taking on this year. They will be working with Point University students and students from a college in Ohio. The main focus will be to build a new ReUse Store a short distance down the highway from the present store in Lanett.

This is the second story in a series of features on the three finalists for Troup County School System superintendent.... read more