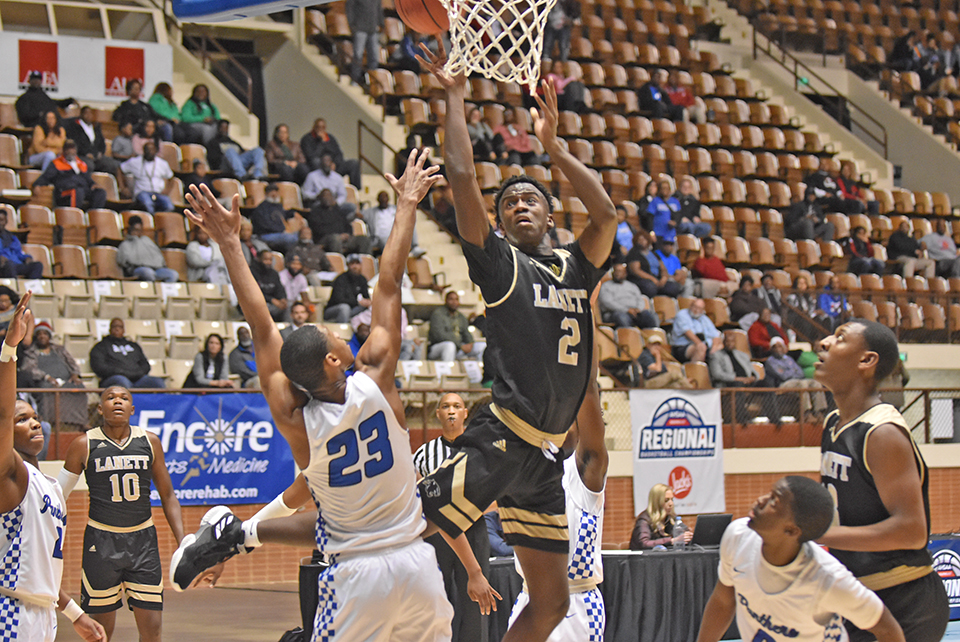 DETERMINATION: Lanett senior forward Tifton “Dee” Dobbs put up an acrobatic shot near the basket in a regional matchup against Georgiana. Photo by Rashad Milligan

GREATER VALLEY AREA — This season marked the beginning of a new era for boys basketball locally.

Listed below is the full 2018-19 All-Valley Girls Basketball Team:

Boston stayed in LaFayette’s gym until his head coach Obadiah Threadgill locked the gym after every home game this season. The 5-foot-11 guard brought out the shooting machine, going through different drills and moves that he could add to his arsenal. Boston usually brought a few teammates with him each night, even sophomore Feliah Greer from the girls’ team.

The drills and extra reps paid off for Boston, who averaged four more points this season as the leader of the 28-5 Bulldogs. The junior averaged 17 points, 4 assists, 4 rebounds and 4 steals per game.

Burton was the second-leading scorer for the Bulldogs this season, averaging 12 points, 4 assists, 4 rebounds and 2 steals per game. The junior guard’s calm demeanor helped LaFayette get comeback victories like the 58-55 road win at 6A Opelika on Dec. 14.

The 6-foot-7 forward’s game resembled one more of a college wing player as opposed to the traditional 6-foot-7 high school post player. Dobbs finished his senior season by averaging the double-double of 11.5 points and 10 rebounds per game for the Panthers.

One half of Valley’s underclassmen backcourt this season, Dozier led the Rams in scoring with averages of 12.7 points, 2.6 rebounds, 2.9 assists and 1.2 steals per game.

Burton was one of the more consistent Panthers this season, averaging 9.1 points and 8 rebounds per game. The senior led Lanett in scoring with 21 points in the area tournament championship win over Wadley.

The high-flying sophomore shifted the momentum on both sides of the ball for the Rams. In the midst of a 21-point fourth quarter comeback attempt at Troup County, Trammell threw down an emphatic dunk to energize the Rams. Valley’s comeback attempt fell short in the 53-49 loss to the Tigers.

The Beulah transfer finished his senior season averaging 10.37 points and 8.5 rebounds per game for the state runner-up Rebels.

Story stepped up into a starting role for the Panthers this season, averaging 9.5 points, 5 assists and 3 rebounds per game. The junior was also a solid player defensively for Lanett in what was presumably his final season of high school basketball. The multi-sport athlete is expected to graduate early next fall in order to enroll early in spring 2020 at a college football program.

Hull led the Wildcats in a season where Springwood saw a complete turnaround with the departure of its entire 2017-18 starting lineup. Hull averaged 12 points and 6 rebounds this past season.