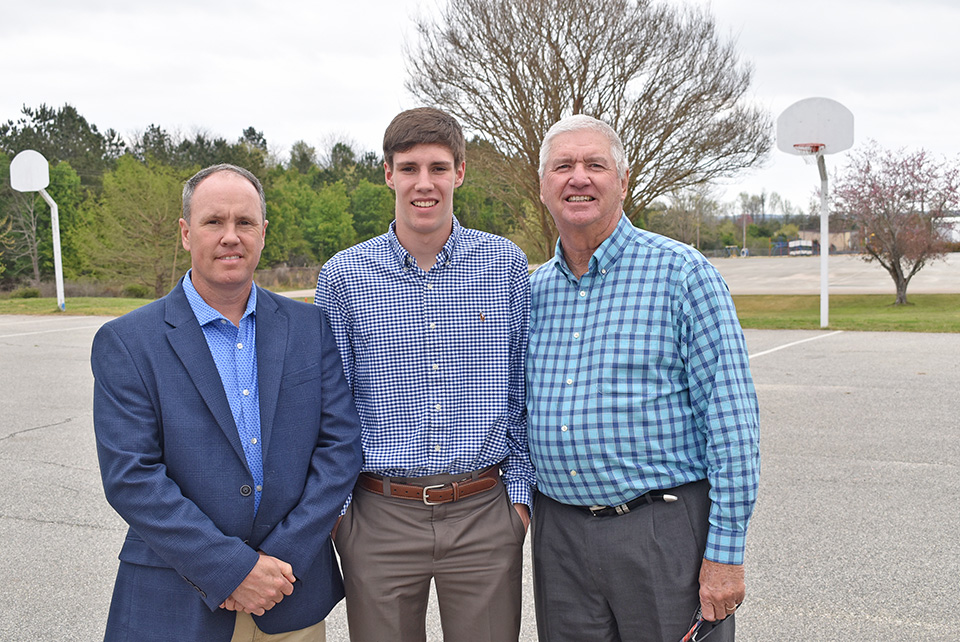 FAMILY MADE: From left are Jason Allen, Payton Allen and Bob Green. On Tuesday afternoon in Montgomery, Payton was nominated to be named the AISA Player of the Year. Payton lost to Morgan Academy senior Gunnar Henderson. Green is Payton’s maternal grandfather and Jason is his head coach and father. Both relatives have trained Payton throughout the years. Photo by Rashad Milligan

LaFAYETTE — Chambers Academy sophomore guard Payton Allen was in Montgomery on Tuesday afternoon for the annual Mr. Basketball banquet. Payton was a finalist for AISA Player of the Year, but lost to Morgan Academy senior Gunnar Henderson.

“It was an honor to be there with all of those great players,” Payton said. “There were a lot of good guys there, and for me to be there it’s only going to help me work harder. Although that’d be a good award to get, I’m probably working more towards helping the team and myself, too.”

Payton was one of four sophomore finalists from all classifications for both girls and boys in the state.

“As a coach, you’re proud for your program,” Chambers Academy head basketball coach and Payton’s father, Jason Allen said. “His teammates had a lot to do with helping him get to this point in his career. As a father, you’re overcome with another set of emotions. It’s never a one-year deal. I’m not just proud of what he did this year, but over the last six, seven years. All of the tournaments we’ve traveled to, the seasons we’ve played. It’s a culmination of things, and I’m happy that he can see that putting forth hard work can result in awards like this.”

Payton led the state champion runner-up Rebels this season by averaging 23.9 points, 9.04 rebounds and 4.3 assists. Payton notched a triple-double on the night he set the school record for points by finishing with a stat line of 46 points, 15 rebounds and 10 assists against Eastwood. He was named the 2018-19 All-Valley Boys Basketball Player of the Year.

Henderson earned west MVP honors at this year’s AISA boys’ All-Star Game after scoring 12 points in the exhibition last month. The senior athlete signed his letter of intent to play baseball at Auburn University in December. Henderson has also been touted as one of the top high school prospects in this year’s MLB Draft.

Payton is finishing his spring break in Nashville, Tennessee to participate in the National Athletic Association of Private Schools (NAAPS) All-American Game, where players from 17 other states will play in an exhibition on Saturday.

“We’re sure what caliber of players are going to be there, but I think it will be a good measuring stick for where he stands,” Bob Green, Payton’s grandfather, said. “We don’t look  at it from a private schools standpoint, we look at a national standpoint, how can he work in any environment?”

Payton gets the opportunity to play against public school players during summers playing with the Auburn Raptors AAU basketball team. After being in the same room of the state’s elite players, Payton said that he wants to focus on getting stronger this offseason.

Green, who also trains Payton, said that Payton needs to improve in a few aspects of his game on the court.

“His outside shooting,” Green said. “I think his technique is very good, I just think that he needs to get more repetitions. His weaknesses are around the basket with his left hand. We need to work on his left hand a little bit more, but everything else is pretty solid.”

Payton has accomplished a number of feats in his two years at Chambers Academy so far, but he’s not satisfied.

“All of these awards and all of these things that I’m going to, I can’t let that get to my head,” Payton said. “I want to be even better because I have a long way to go to where I want to get.”