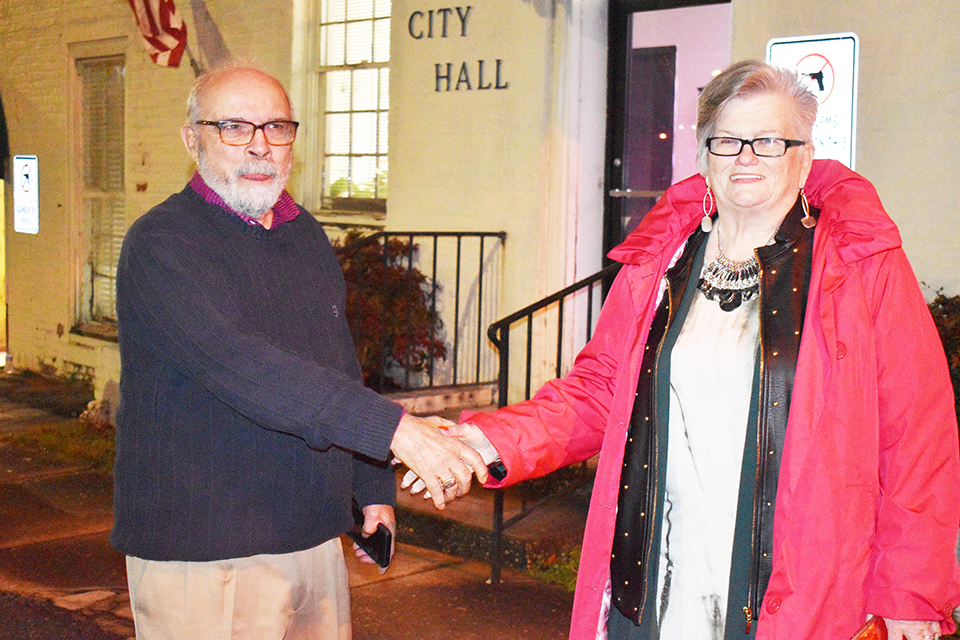 David Ennis and Charlotte Blasingame are facing off in a run-off for the District B council seat in LaFayette. -- Dustin Duncan

LaFAYETTE — The LaFayette City Council has been short one member for nine months, but by the end of Tuesday, barring something unusual, District B in LaFayette will finally have representation.

Charlotte Blasingame and David Ennis are vying for the seat that has been vacant since June 2018 when former mayor and councilman Mathew Hurst resigned to take a job out of the district.

In February, the city held a special election between Blasingame, Ennis and a Shannon Hunter. Blasingame received the most votes at 65 and Ennis came in second with 40, triggering the runoff election since a single candidate did not obtain 50 percent of the vote. Hunter received 36 votes in February. Ennis said Monday he’s thankful for everybody who voted before and hopes to see support again Tuesday.

“I just appreciate everybody’s support, and I ask them to come out again,” Ennis said. “I’ve had some good people working for me, and I am really humbled by that.”

Blasingame said Monday she’s looking forward to a win Tuesday night and to the end of a campaign that has been continuous since the end of last October.

“I want to be a voice for the people, and I hope the people want me to be that voice,” she said. “I hope they are ready for a change.”

She said there had been 52 absentee votes turned into city hall as of Monday afternoon, and she hopes to see a large turnout Tuesday.

“I just want to think everybody in District B for being so supportive throughout this campaign,” Blasingame said. “I am very positive about it.”

Both candidates said they plan to be at city hall Tuesday night to hear the results in person.

After Hurst resigned in June, the council had a list of several candidates who were interested in an appointment for the seat. During an August council meeting, Mayor Barry Moody said he narrowed his two selections down to Blasingame and Ennis. He said Ennis left the city in strong financial shape when he decided to get out of politics, and Blasingame ran a solid race against Hurst in 2016. He ultimately recommended Blasingame as his choice, citing her runner-up status in the race to Hurst.

“At the end of the day, the race she ran against Matt is what I heard the most,” he said back in August when he named her as his selection. “It was not an individual name. It was, ‘why doesn’t the person who lost the race have the opportunity to do that job?’”

During the same meeting, Councilwoman Tammie Williams said she felt the decision was made to appoint Blasingame without any input from the rest of the council. Eventually, the council decided it would hold an election to determine its next member.

The Polls will be open from 7 a.m. to 7 p.m. central time, at LaFayette City Hall. The election results will be official the following Monday, and the new council member is to be sworn in April 8.