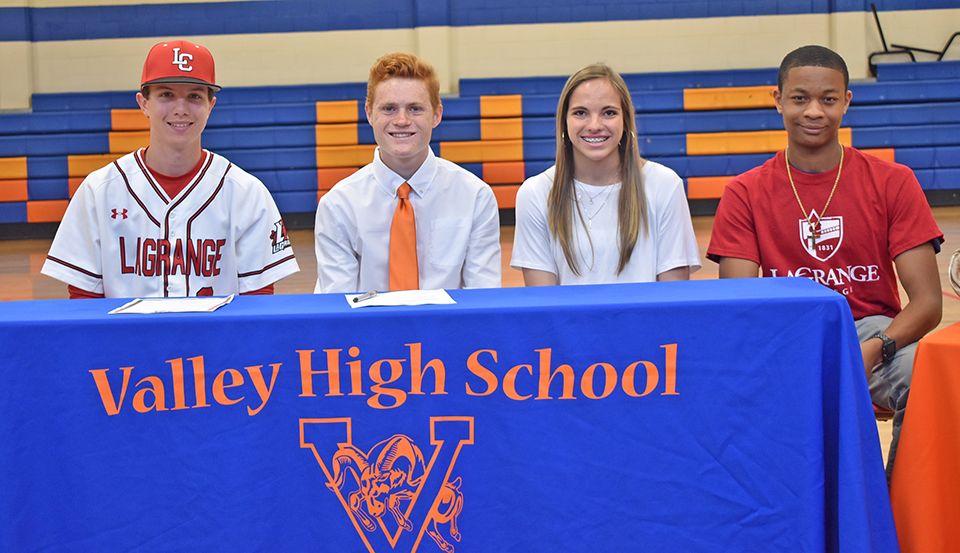 VALLEY — Three different sports and two different schools were represented for the four Valley High seniors who signed letters of intent to play sports on the collegiate level on Friday afternoon.

Andrue Davis, Devin McGlon and Elijah Rachel are all going to LaGrange College, while Patrik Pigg will attend Auburn University at Montgomery in the fall.

Davis signed to play for the Panthers’ baseball team. It’s the sport that he’s played since he was three-years-old in a tee ball league. He moved up to the seven and eight-year-olds league so that he could keep playing with his older brother.

“It feels good being able to go to your dream college for free,” Davis said.

He attributes hard work and dedication as the main reasons for how he reached the next level of the sport.

“I think it’s mainly more of a self-drive,” Davis said. “You can’t be a college athlete just based off of what you get at the field and at practice. You have to do a lot of stuff on your own, and that comes with determination and self-responsibility.”

Signing to join the Panthers’ tennis program is the icing on the cake for McGlon’s senior year. She was also named Ms. VHS a few months prior. McGlon said that she’s spent time practicing on the courts for seven days a week, and took lessons during the summer from instructors like Point University’s head tennis coach Chad Simpson. She is the first athlete to sign a tennis scholarship in Valley athletic director Adam Hunter’s 12-year tenure at the school, Hunter said.

“It’s really exciting,” McGlon said. “I never really imagined myself [being a college athlete], so it’s a huge accomplishment and something that I’m truly blessed to be able to experience.”

McGlon said that she plans to get her PhD in English while minoring in journalism as an undergraduate student. She expects the transition to college to be more comfortable with Davis and Rachel, too.

“It takes the pressure away a little bit knowing that I’m going to have somebody there that I know,” McGlon said. “It’s extremely comforting, and they’re definitely some of the closest people that I’m with in class. It’s pretty cool getting to go along to school with them.”

Rachel’s intent to sign with LaGrange College was a bit more unexpected than the other three Rams on Friday afternoon.

Turning down the bigger-name school to compete on a D-III level is something that Rachel said he wouldn’t believe that he’d do a couple of years ago.

“At first, if you would’ve told me that I would’ve done that,” Rachel said while widening his eyes and before laughing, “I would have no response to that, but my parents told me that it doesn’t matter about the name. It’s about if you can build a future at that place.”

Rachel said that he plans to major in Biology to begin working toward becoming a plastic surgeon one day.

Pigg joins Rachel as the first class in Hunter’s tenure to sign a scholarship to run cross country as well.

“I’ve waited on this for a long time, ever since I started working for it,” Pigg said. “Now, it’s finally official. I can’t wait to get down there and start working hard.”

“My last year for sure is where I wanted to be,” Pigg said. “I hit the times I needed to, all of my workouts were really good. I just had to do what I had to do at state, and it all worked out the way that I wanted it to. The same thing goes for track, as we go to outdoor, things have been going really well. I’m in a good position to run some really fast times, I want to get as close to under 10 as possible, and I want to finish as close to the top 5 in state in both the 1600 and 3200[-meter runs].”