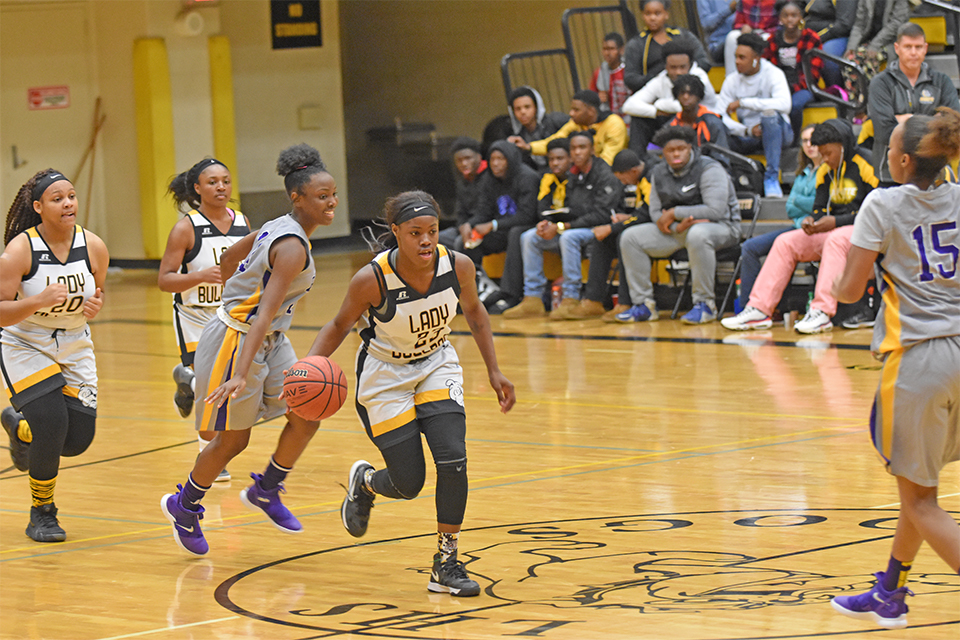 file photo | Times-News STOP HER IF YOU CAN: LaFayette sophomore Feliah Greer scored 51 points and pulled down 21 rebounds against Booker T. Washington in November. She has been named this season’s All-Valley Girls Basketball Player of the Year.

A self-proclaimed troublemaker as a child, one of Greer’s friends in Lanett, Delresha Thomas, suggested that Greer tried out for the junior high basketball team when she was in seventh grade.

“When I tried out, I liked it, and I just kept going from there,” Greer said. “Now, I really thank her for asking me to try out because there’s no telling where I would be right now if it weren’t for basketball.”

Greer said one of the primary reasons why she used to get in trouble so much was because there wasn’t much for her to do after school. Her mom worked during the day, which opened the gateway for Greer to get into conflicts.

After not playing junior high basketball in eighth grade, Greer transferred back to LaFayette to live with her grandmother, Leona Traylor, and play for the Bulldogs’ varsity team as a freshman. Greer went on to average 18 points and 18 rebounds per game that season, and was named the 2017-18 All-Valley Girls Basketball Player of the Year.

“I just played,” Greer said after winning the award as a freshman. “It wasn’t different than junior high for me.”

In addition to being honored in the area, the first-team All-State selection had every eye glued to her to see how she would follow up the explosive freshman campaign.

Greer gave the crowds what they wanted to see in her sophomore season by adding a 51-point, 21-rebound game against Booker T. Washington in November to her resume. A month and a half later, she notched a quadruple-double with the final stat line of 24 points, 12 rebounds, 10 steals, 10 assists and seven blocks in a win over Ranburne. She also reached the 1,000-career point plateau this season.

Greer went on to finish her sophomore season with averages of 27 points, 19 rebounds, five steals and five assists a night to be named the All-Valley Girls Basketball Player of the Year for a second consecutive time.

“It makes me feel proud,” Greer said of receiving player of the year again.

Many of the things that come along with being a star athlete are still new for Greer as she makes the adjustment from being a regular student five years ago. After her 51-point outburst, Greer politely declined all interview requests through LaFayette girls head basketball coach Michael Bratcher. Now, she said that she’s ready to leave her legacy at LaFayette in any way that she can.

“At the beginning of the season, I didn’t want to talk because I was scared and shy too,” she said. “I still am now, but I’m just getting over something I need to get over because when I keep doing what I’m doing, it’s going to be more people coming to me to ask questions.”

Another reason why Greer has been hesitant to open up publicly is because of her background. From being the childhood troublemaker to not living with her parents on a consistent basis, there were parts of her story that she wasn’t ready to tell yet.

“They [Greer’s parents] were there, but they weren’t there like other people’s parents were,” she said. “They weren’t always coming to support me and all of that. I just really want to get that out there, and stop holding it in.”

Greer said that she hopes she can build a big enough platform to be able to return to LaFayette in the future to encourage local kids who are in the same situation that she was once in.

“LaFayette made me better,” Greer said. “I’m not saying that where I was wouldn’t have made me better, but with the community and the environment over here, you can’t really get into trouble. Coming to LaFayette may have been the best thing that I have done.”

An A/B student in the classroom, Greer said that one of the things that she wanted to improve on before next season is her to focus more in regard to her academics. She said that when she walks across the stage and heads to college, she wants the community to remember more than a standout high school athlete.

“I want a name at LaFayette,” Greer said. “I just don’t want to graduate and be forgotten. I want them to remember me, not only for basketball, but for other things. My schoolwork, how I helped other people and I just want to be remembered.”