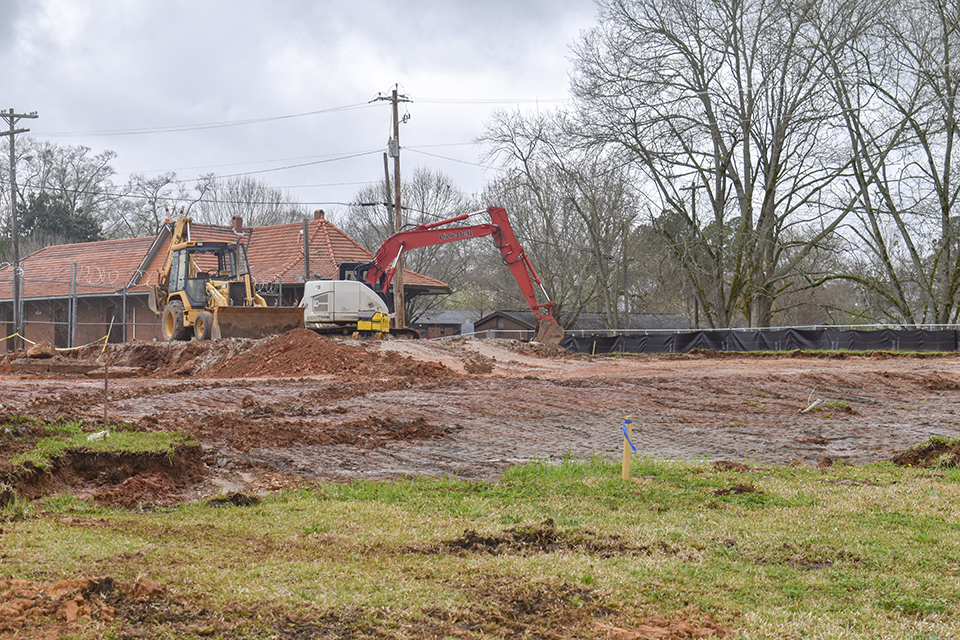 The site of the Chambers County Jail expansion project. Chambers County Attorney Skip McCoy said part of the soil by the railroad tracks are contaminated so the project is on hold for a short period while additional testing is done. He said the project should resume by the first week of April.

LaFAYETTE  — The LaFayette City Council is going to try and move some money around to purchase equipment for crews to safely tear down dilapidated homes.

Tearing down homes neglected homes within the city limits has been a focus in 2019 for the LaFayette City Council, bringing forward a list of about 10 homes each week that have been tagged by the city for the way it looks. Several of those homes have been tagged for demolition, but George Green, building superintendent, said his department needs better equipment at Monday night’s city council meeting.

“We need the equipment to do what we are doing now and make our operation a little bit safer,” Green said.

His original offer to the council was to make a bid at an auction in Montgomery which started Tuesday and would run through Friday. He said he could potentially get a used excavator for about $40,000 if everything lined up right.

LaFayette Mayor Barry Moody told Green Monday night that the council wants to make the appropriate purchase to perform the work, but it has to be sure the money is there.

Councilman Michael Ellis recommended having a budget meeting to see if money can be moved around to find funds and possibly even buy a new piece of equipment for about $90,000. Green said other products within his department are needed as well besides an excavator.

“That’s the importance of having a budget meeting so that everybody can get on the same page and we can look at the whole budget,” Ellis said. “Maybe we can find somewhere where we shouldn’t be spending as much money and get the thing that we need.”

Green said everything is in place to tag dilapidated homes, even the official ordinance spelling out how a house is set for demolition, but the one thing that is missing is the proper equipment. He said the department has been using a backhoe to perform some work, but that isn’t what is needed for that work.

“There might be a delay on carrying this process out until we get what we really need,” Green said.

Additionally, Green said there are safety concerns without an excavator. With the property equipment, those working on the home don’t have to get as close to a home with performing the demo as they would have to with a backhoe.

“I just want to put it out there from a safety standpoint, that is why I am trying to push the issue or that we delay what we are doing,” Green said.

The council decided to host a budget meeting to look for potential funds at 5 p.m. on April 8 — an hour before its next regularly scheduled meeting.