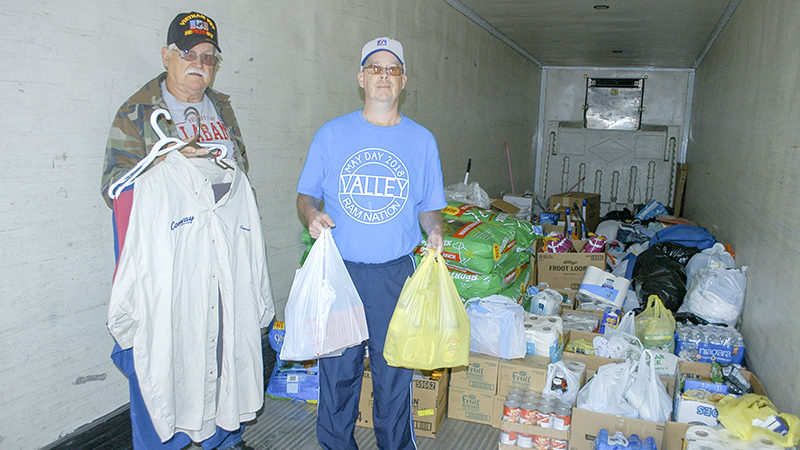 FILLING THE TRUCK: James Freeman and Jamie Pippin have been busy this week filling a trailer that’s bound for Lee County to help victims of the March 3rd tornado that killed 23 people and caused millions of dollars in property damage. An 18-wheeler with the Old West theme on the trailer has been in LaFayette, Lanett and Valley collecting donations this week. --Wayne Clark

VALLEY — An 18-wheeler with a trailer sporting an Old West theme has been getting a lot of attention in Chambers County this week. It’s been serving as a collection point for donations bound for tornado victims in Lee County.

On Monday and Tuesday of this week, the collection area was outside the Chambers County Courthouse in LaFayette. On Tuesday and Wednesday, it was a visible presence outside El Rio Grande Mexican Restaurant in Lanett, and on Thursday and Friday, it was at Givorns Foods in Valley.

Scott Willingham of Scott’s Towing has played a key role in this but doesn’t want any credit for himself. Instead, he credits a higher power and the vast generosity of the people of Chambers County, especially when it comes to helping storm victims.

Sheriff Sid Lockhart and the courthouse staff helped when the big rig was in LaFayette. El Rio owner Eddie Robles and the staff of El Rio did the same when the truck was in Lanett.

“Mikey Givorns and Danny Crosby have been so good to us the past couple of days,” Willingham said. “The people have been so giving. We even had people who would get their groceries and then go back to the store and fill another buggy and bring it to the truck. Some people have donated two or three times.”

The trailer is being filled with everyday necessities such as bottled water, cleaning supplies, mops and brooms, trash bags, paper cups and plates, snacks, toilet paper and pet food.

“Even if you give one bar of soap it will help,” he said. “We are not doing this for any credit. To God be the glory,” he said. “Anything the Lord puts on your heart will be appreciated.”

One other item on the truck is a large box filled with bibles.

The Old West truck will be at Walmart in Valley on Saturday. There will be a dual purpose that day as there’s also a fundraiser going on for the Children’s Miracle Network. The trailer is getting close to being filled. It will be heading for the Beauregard/Salem/Smiths Station area when that happens.