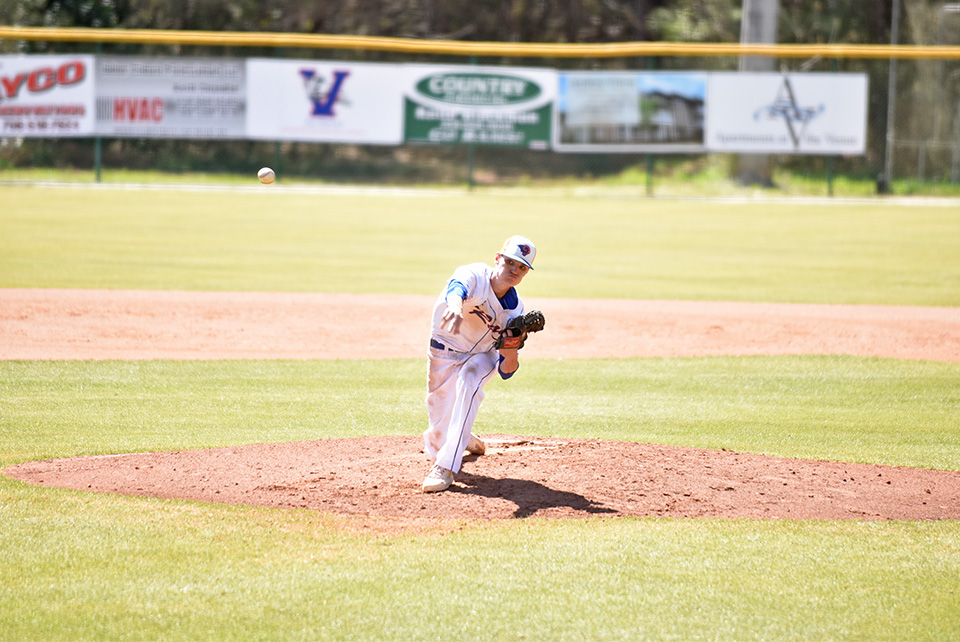 “Lumpkin was a bulldog on the mound for us,” Valley head baseball coach Patrick Shivers said. “He didn’t have his best stuff today, but he battled through it in a complete where he threw about 115 pitches. He’s that type of guy. He has what everybody calls ‘elastic arm.’ He’s got a rubber arm, he throws all day. He likes to throw BP to the kids in pregame on days that he’s not pitching. We feel confident in him anytime he’s up there pitching on the mound.”

Lumpkin battled back from adversity early in the contest after walking the leadoff hitter and giving up three runs in the first inning, but Shivers and his staff decided to keep the senior in the game.

“The team was mature enough to know that it was early, and we scrapped back,” Shivers said.

Valley scored only one run in response to the visitors’ big first inning, but the Rams broke through to take the lead in the bottom of the third.

The momentum of the big half inning began in the bottom of the second inning when the dugout and coaches began encouraging Valley batters to swing with two strikes. The aggressiveness is something that Shivers previously said he wanted the team to improve on.

“That’s much improved from when we’ve been striking out looking three-to-five times a game,” Shivers said. “When we get in those two-strike counts, we tell the guys that if you saw the pitcher after a couple of at-bats, you’ve seen everything that the pitcher has. You’ve seen the outpitched, and most times in high school baseball, you’re going to see the curveball on two strikes. We tell the guys that they’ve seen everything, so be balanced, stay back and just react to anything else. Think off and react. I think they did a pretty good job of that.”

At the top of the third, Lumpkin battled with a Tallassee batter for about 12 pitches before the visitor launch a ball into deep left field. Valley sophomore left fielder CD Clark sprinted to the warning track near the fence at Crestview Field to make an outstanding catch.

“That was a big out,” Shivers said. “If you walk that kid, then your pitcher feels defeated. If that kid comes through with a big base hit right there, then the pitcher feels defeated, but we made a nice play, got that out and made Cody feel relaxed on the mound  knowing that the defense was playing behind him.”

In the bottom of the third, Senior Andrue Davis collected one of his three hits on the day to get on base, before eventually scoring on a wild throw that went into the backstop. Valley loaded the bases, and a sacrifice single from junior Daniel Osborne tied the ballgame at 3.

Another wild pitch from Tallassee allowed Lumpkin to help his own case, as the senior sprinted to home plate to give the Rams their first lead of the day at 4-3.

The Rams scored three insurance runs in the bottom of the fifth inning thanks to bats like seventh-grader Jackson Sanders and sophomore Hunter Meadows.

Tallassee loaded the bases and trailed 7-4 with one out in the top of the sixth inning before Davis leaped and caught a line drive and tossed it to Meadows at third base to tag out No. 2 on the play.

Lumpkin got two quick outs at the top of the second before letting two batters on base.

Shivers asked Lumpkin if he was okay enough to finish the game, and the senior told the coach yes before sealing the victory for the Rams.

Valley returns to action for a doubleheader at Tallassee to finish the first area series of the season. Shivers said that while three-game sweep would be nice, two victories and a series win over Tallassee is the goal.