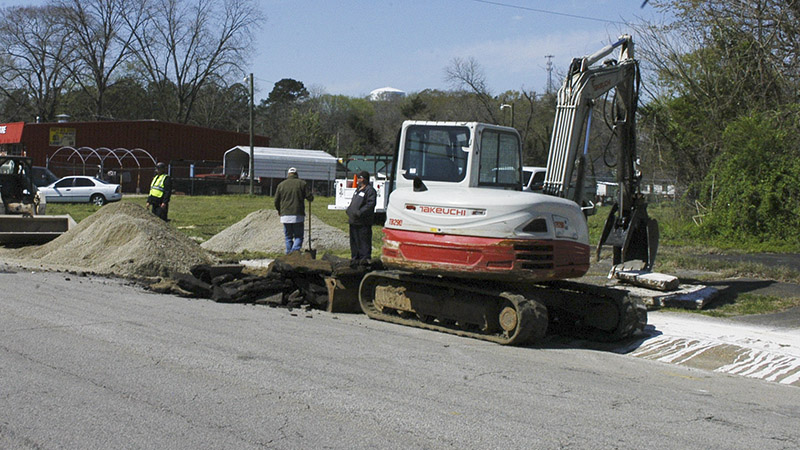 The third phase of the Lanett streetscape project has started. --Wayne Clark

LANETT — Phase III of the Lanett downtown streetscape project is underway. On Monday, demolition work began on the existing sidewalk on the portion of North Lanier Avenue that runs from the Tanyard Creek bridge toward Cherry Drive.

“To save on costs, our Cemetery and Grounds Department is doing the work,” Lanett Mayor Kyle McCoy said. “Once the concrete is removed, the area will be temporarily filled back in to help with the flow of traffic to businesses in the area.”

This is prep work for the new sidewalk that will be going in. It will look very similar to Phases I and II, with wide walking space, benches, brick pavers and decorative lamp posts.

“There won’t be as much greenery as we have on the south end,” McCoy said.

This portion of the project is funded by a $365,000 grant with the city having a 20 percent match.

“When it gets started, the contractor will have 60 days to have it completed,” McCoy added. “Temperature and the weather will be factors. Concrete can’t be poured if it’s 40 degrees or below. Rain will get everything stopped.”

Chris Clark Paving and Grading will be the contractor. Subcontractors will do some phases of the work. Jamie Bradfield of LaGrange did much of the concrete work on Phases I and II.

Phase IV will complete the project on both sides of North Lanier Avenue from the Georgia state line and the downtown area. Most of this work will be taking place on the east side of the street from the state line to the Tanyard Creek bridge.

“We will be applying for a grant this spring,” McCoy said. “We should have Phase III closed out by then.”

The city will be seeking a TAPP grant. Such grants, McCoy said, encourages pedestrian walking in areas where there are businesses. He said this is already happening with Phases I and II.

“I am seeing more people walking in the downtown area,” he said. “The Point University kids are walking and jogging here, and I think we’ll be seeing more of it when the streetscape gets to Cherry Drive.”

McCoy said he’s gotten many positive comments about what’s been done so far.

“They’ve been telling me that it’s tying things together to promote the downtown area,” he said. “The downtown fountain will make for a nice centerpiece for the project.”

It will jet water much higher than the old one did, he said.

“It’s going to be a place that gets photographed a lot,” McCoy said. “It will have lights we can change colors for the seasons.”

The lights can be green for St. Patrick’s Day, pink for Breast Cancer Awareness Month, orange for Halloween and green and red for Christmas. McCoy said there’s a good chance the fountain will sport black and gold lights when Lanett High wins a big game and red and white when Springwood wins one.

“I think people will like what we are doing,” Mayor McCoy said.