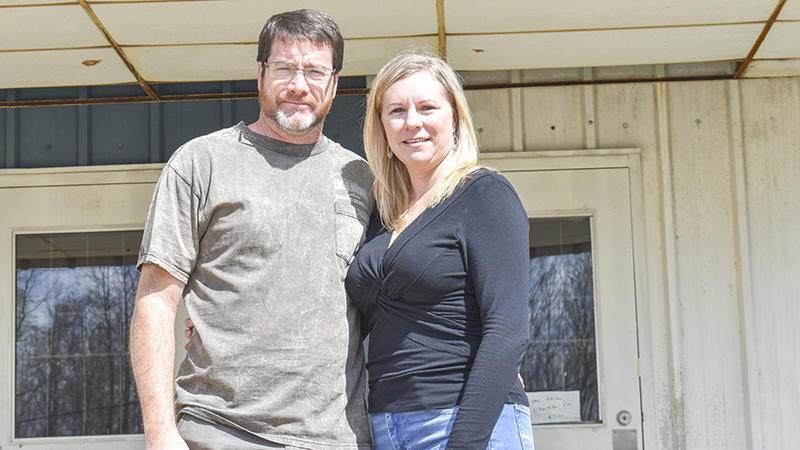 Jason and Carmen Turnham are managing the Magic Valley Skateland. They have been skating at the rink since 1980. --Dustin Duncan

VALLEY — In 1980, two nine-year-old kids were at Magic Valley Skateland in Valley for the opening night of the newly-constructed roller-skating rink.

Fast forward to March 2019, and those same kids — Jason and Carmen Turnham are ready to take over something that was a fond memory in their childhood and inject new life into it.

Currently, Nellie and Drayton Henderson are the owners of the rink, and it’s open on Friday nights from 6 to 9 p.m. Nellie Henderson said the Turnham’s are leasing the building with an option to buy down the road.

The Hendersons are in their 70s and said that it’s time to move on to other things.

She said they would miss the kids who skate on Friday nights.

As for Jason and Carmen, they said they are planning to put their spin on the place.

They plan to renovate the front entrance of the building, put a new coat on the actual skating rink and do some work in the restrooms.

Carmen Turnham said there would also be two party rooms.

The Henderson’s will run the business through Friday, March 29, and then the Turnham’s will take over April 1.

They plan to have the rink open that following Friday.

“It will be a work in progress because we have to keep it open,” Jason Turnham said.

The Turnham’s plan to have the rink open throughout the weekend.

The admission will be $8 on Friday and Saturday and $2 to rent skates.

Carmen said they wanted to do something to give the youth in the Valley area something to do during the weekends.

“This area doesn’t really have much for kids,” she said. “You have to go out of town to do anything.”

The skating rink is something that is part of their childhood, and they want to keep it alive for the current generation.

“We’ve been here — this is where we grew up,” Jason said. “This was our every weekend thing.”

Carmen said a lot of help will be needed the first few weeks to get the rink where they want it.

She said anybody who wants to give a helping hand through labor hours or materials could reach them through Facebook on their page — The Skatin’ Rink.