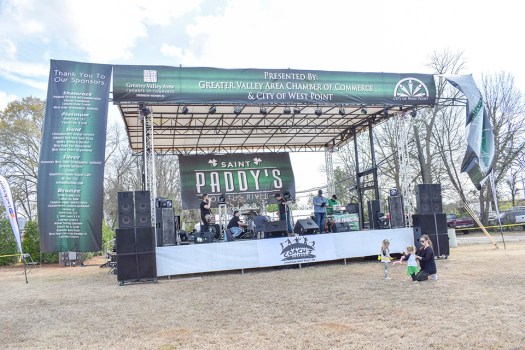 The event kicks off at 11 a.m. with activities for children such as Touch-A-Truck with first responder vehicles and a Chambers County Sheriff’s Department helicopter. There will also be four cars from the hit 1970s movie “Smokey and the Bandit.”

Chamber of Commerce Marketing and Events Manager Carrie Royster said there will also be life-sized laser tag, several inflatables and the Cybergame truck from Auburn at the event. She said the children’s activities end at 4 p.m.

This year’s event will have more music and more to do for adults throughout the day.

For adults, the event will include games such as giant cup pong, a mechanical bull and cornhole.

A live DJ will be playing music throughout the day, but Royster said there will be four full bands starting at 3 p.m.  The live entertainment will include Corbin Hoats, Blaine Rudd, Wilson Brothers Band and Tim Dugger.

“One of the things that is said the most to me is that we don’t have enough to do in this area,” Royster said. “St. Patrick’s Day is something that has been going on for years in West Point, and we try to add to that and make it a family-friendly event.”

She said she hopes the community will make the trip down to the river and enjoy the festivities.

“We hope everybody will come down to the park and enjoy the luckiest day of the year,” Royster said.