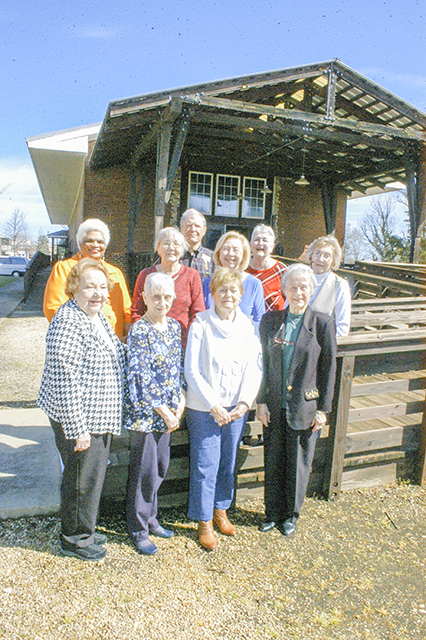 WEST POINT — During the noon hour on Tuesday, a total of 19 men and women from the local area received recognition at the annual Alabama-Georgia Hospital Auxiliary awards luncheon at West Point Depot.

“The importance of our volunteers cannot be overstated,” said EAMC-Lanier CEO Greg Nichols. “No one wants to be in the hospital. It’s so important for those who are there to see smiling faces and helpful people. I see people here today who have been volunteers for years and years and years. We want you to know we appreciate you and that what you do at the hospital is important for the community.”

Drs. Fred Aziz and Garrett Rich of EAMC-Lanier’s Acute Rehabilitation Unit spoke to the group about what they do and how important volunteers are to them. The unit works with people who have had heart attacks or strokes, as well as those who have been injured in a fall, automobile accident or have sustained an injury in some other kind of mishap.

“We want to return people to freely-functioning status so they can go back home and resume their normal life,” Dr. Aziz said. “Eighty percent of the people we work with can do that. That’s much higher than the national average.”

A recent rating has the EAMC-Lanier Acute Rehab Unit among the top five in the state.

The unit is very much a home-like setting, with a bathtub, dish washer and washer and dryer. Trained therapists work with people to regain functioning they will need to have at home. There’s even a car donated by Kia in which someone who has been injured can reacquire the ability to drive.

Volunteers play a critical role in manning the front desk and the hospital gift shop. Proceeds from the gift shop will be used to purchase a van that will take nursing home residents out to eat, to the movies and to events such as Fantasy in Lights at Callaway Gardens.

“They are very excited about that,” said Wiki Gladden.

“She works on Monday and Wednesday afternoons in our gift shop,” said Gladden. “She’s very skilled in taking care of what needs to be taken care of.”

The program concluded with the guests at each table playing a game and retired educator Jo Frances House telling some of her classic jokes. One of which was: Why can’t an elephant use a computer? Because he’s afraid of the mouse.