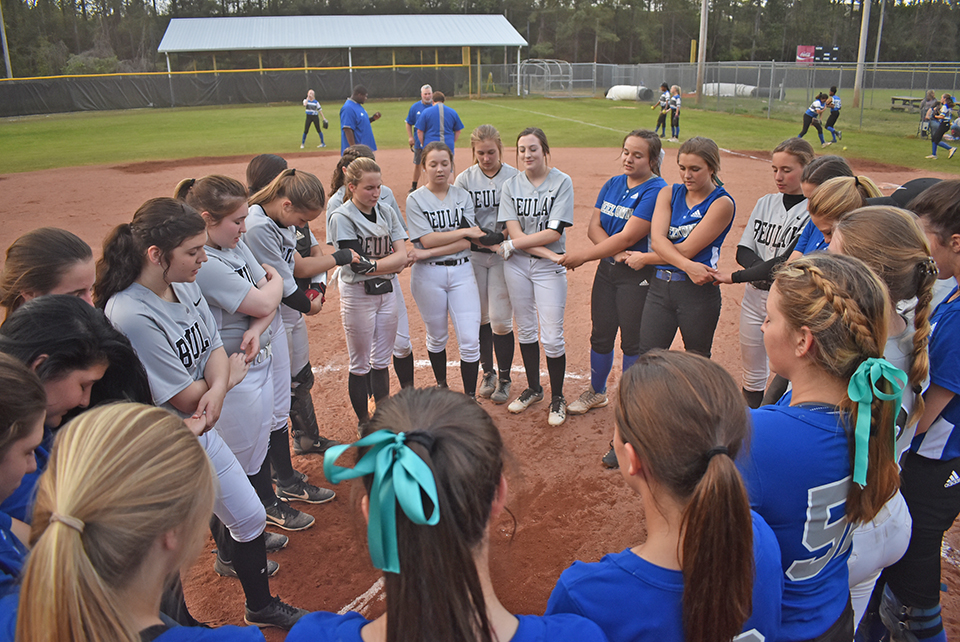 FOUR IN A ROW: The Beulah softball team won its fourth game in a row on Friday night against Reeltown. Photo by Rashad Milligan

“I feel good with the ‘W,’” Beulah head softball coach Stan Pepper said. “We went over [to Reeltown on Feb. 28] there, and had to come from behind in extra innings to win. I was pleased [with Friday night’s performance]. We came out kind of flat, though.”

The Bobcats trailed 2-0 in the opening inning before getting on the board in the bottom of the second.

Beulah’s offense saw a breakthrough, however, in the bottom of the third inning. The Bobcats began to score with no outs, Reeltown made a pitching change and Beulah continued to score.

“Everything fell in place,” Pepper said. “There were no outs, and we just hit the ball in the gaps two or three times. It was a good, solid inning for us. Our bats are starting to come alive at the right time, and everything’s starting to fall into place for us right now.”

The Bobcats then scored on an RBI single in the bottom of the fourth to push the lead to 7-2.

When it appeared that Beulah had the game put away, there was an error on a throw to senior first baseman Kensley Taylor at the top of the fifth inning. The next Reeltown batter popped up into shallow centerfield before Beulah infielder tripped and dropped the ball to get two runners on base. The next Reeltown batter knocked a clean hit near the left field foul line for a two-RBI triple to cut the deficit to 7-4. Pepper then called a quick infield meeting at the mound.

“It’s a lack of focus at times during the game because our pitcher is throwing so well that our girls literally fall asleep sometimes,” Pepper said. “Then we wind up having an error, but one thing that we have cut down on is having two or three errors in one play. If we cut the errors down, I feel pretty good about our team. I feel like we’re pretty decent if we cut the errors down, if  we don’t though, anybody can beat us anytime we play.”

Good base running and a wild pitch allowed the Bobcats to score the eighth run for insurance in the final offensive frame for Beulah on the night.

“Going into the sixth inning, I told them that I just want one run back,” Pepper said. “We gave up two there [in the fifth inning], and I just want one. Once we got that run, I knew we were in good standing.”

Reeltown scored a pair of runs at the top of the seventh inning, but Morris eventually ended the night with her 10th strikeout of the game. Offensively, Beulah senior Jasmine Bonilla raked in two RBIs, and senior Kensley Kirby finished with two hits.

“Our four seniors play critical roles,” Pepper said. “Some of them don’t even know how critical their play or what they’re doing is sometimes. They ’re all good leaders. I’m really proud of them, and as long as they continue to be leaders like they have been, we’re going to continue to have a good season. I want them to finish strong. I want them to do something that’s never been done around here, and that’s to make it to Montgomery, or even make it far in the state tournament. I want these seniors to go out on a high note, they’re the building blocks of this program and they’re showing the younger girls how you’re supposed to do it. I’m really proud of our seniors.”

The Bobcats are in the midst of playing five days in a row, with Saturday being the final day of the stretch.

Beulah is slated to host Russell County at 1 p.m. EDT. on Saturday.