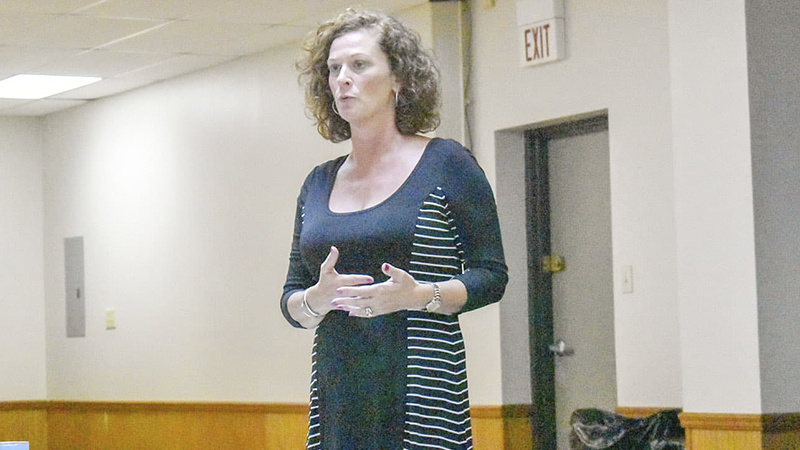 LaFAYETTE — The location of a possible consolidated high school for LaFayette and Valley High Schools got the biggest rise out of a LaFayette crowd Thursday night at the ALFA Building in LaFayette.

Greg Ellis of HPM, a firm hired by the school district to survey potential costs and locations, was asked if the school had considered any sites closer to LaFayette. He said the district had not looked at property in LaFayette because initial projections showed property in LaFayette did not meet the minimum acreage needed to build a potential high school. Chambers County Superintendent Kelli Hodge said the district would need at least 40 acres at the start to build a campus. She said 40 acres would not account for any future growth.

Ellis said a consolidated high school would cost between $70 and $80 million, and it would operate on the central time zone. He said it would take an additional $10 to $15 million to convert the existing LaFayette and Valley High School buildings into spaces for middle schools.

Ellis also presented the crowd with four “site zones,” which were not specific in nature, but explained to parents about average travel time for students. He said the study did not look at specific pieces of property.

“I am not talking about a specific piece of property,” Ellis said when referring to the site zones. “We are nowhere close to that.”

The first site zone was near exit 70 on Interstate 85 in Cusseta. He said 92 percent of students in Valley and LaFayette would have a travel time of 16 to 20 minutes or less at this site.

The second site looked at moving toward Highway 50 between Valley and LaFayette. Ellis said 83 percent of students would have a travel time of 20 minutes or less.

The third site mentioned would be further east from Highway 50, toward the Huguley neighborhood or just south of Phillips Road off exit 77. Ellis said the number of students with a travel time of 20 minutes or less would be in the upper 80s, and just about 100 percent of students would have a travel time of less than 25 minutes.

The fourth potential site discussed was even further east in the Fredonia area, and again, about 80 percent of students would have less than a 20-minute travel time.

Hodge said the travel times discussed did not take bus travel into account.

Another concern for the LaFayette crowd was who would lose their jobs if the two high schools consolidated. Hodge said the district hasn’t considered the people aspect of the situation yet because it doesn’t even have a building yet, much less an actual vote by the district to move forward. However, she said the number of teachers and administrators mandated by the state is calculated by the number of students attending the school.

Ellis said the number of people working in the building has been put aside at the moment.

When Ellis spoke about the cost to build a new high school, he said there would be operational cost-savings.

He said later that those cost-savings were centered on saving on utilities, bus travel, groundskeeping and security because of one facility instead of two. He said the number of people working in the building hasn’t been discussed as part of saving money.

“Those are the type of categories we are looking at,” Ellis said. “What would we save on paying our bills — that is really all we are taking a look at.”

Early in the meeting, Hodge reiterated from the Valley meeting that the school district would not pursue a property tax increase to fund a consolidated high school. She said if the district consolidated, it could borrow up to $47 million.

If the district pursued another option, like renovating all elementary and middle schools to bring them up to building codes, it would cost $98 million. It would also only allow the district to borrow about $30 million because there would still be several instances of duplicating services.

Hodge said the district would also pursue workforce development grants because of the Career Technical Center, which would be housed in the new consolidated school.

Just before the forum closed, Hodge informed the crowd once again that a decision has not been made. She said there will be additional information to come because the district wants to talk more about the academic opportunities that would come with consolidation.

“Can I tell you that next week that I am going to go before the board and make a recommendation — absolutely not,” Hodge said. “I can’t tell you when and if that is going to happen. If there isn’t money, there won’t be any kind of recommendation ever.”

She said consolidation or renovation of existing facilities is contingent on funding, property being available and other factors. She said any new high school, if approved, isn’t something that would open in the fall, adding that it would probably take at least two years of construction from groundbreaking to opening the doors.

“There is no timeline for when I am going to make a recommendation,” Hodge said.

She said the district will continue to research to make sure the funding, information and the support is there to back to move forward.

“However, there will come a time where I have to make some sort of recommendation,” Hodge said.

“It may be we are heading down the wrong road, and we have to flip and go some other route. It may be that I go to the board and say ‘let’s do it.’”