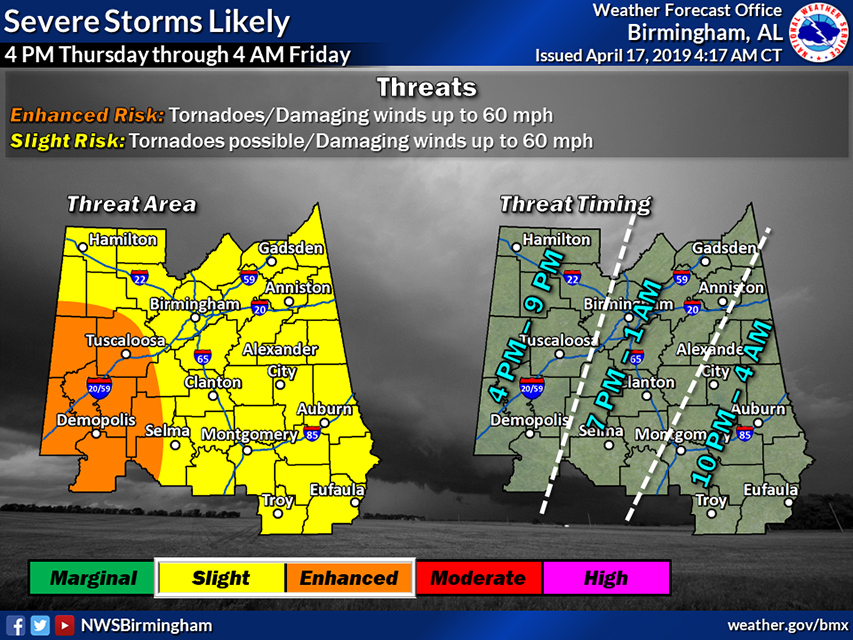 BIRMINGHAM  (AP) — After a weekend of rain and high winds, more severe weather could be on the way Thursday night into Friday morning.

The Storm Prediction Center said a front stretching from southern Texas to central Kansas created a risk of bad weather as far east as Louisiana on Wednesday, but the threat will move into the Deep South on Thursday. The weather service says there will be an enhanced risk of storms, including twisters, from the Louisiana Gulf Coast as far north as northern Mississippi and Alabama.

The National Weather Service in Birmingham has Chambers County under a slight risk for severe storms, meaning short-lived and or not widespread, isolated intense storms are possible. The weather service estimates storms will impact the area between 10 p.m. and 4 a.m. on Friday.

Parts of western Alabama, including Tuscaloosa and Demopolis, are under an enhanced risk for severe storms, according to the National Weather Service in Birmingham. Enhanced means numerous severe storms are possible, with a few being intense.

The National Weather service said at least 41 tornadoes struck from eastern Texas to Georgia just days ago. Forecasters say Mississippi was hardest hit, with 15 tornadoes confirmed there. At least eight people died in the South.