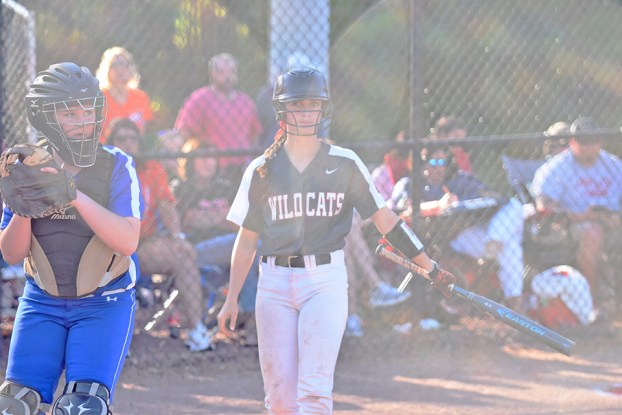 RIVALS: The Springwood School softball team fell to Chambers Academy 4-0 on Tuesday afternoon. It was the final game of the regular season for the Rebels, and the second-to-last regular season game for the Wildcats. Photo by Rashad Milligan

LANETT — The Chambers Academy softball team (9-2, 4-2) defeated Springwood School (5-19) 4-0 on Tuesday afternoon. The Wildcats still won the season series 2-1 over the Rebels, however.

“Their pitcher tonight had over 100 strikeouts this season, so she’s doing something right,” Springwood School head softball coach Galen Smith said. “She’s kept us at bay. We had  one hit Saturday and four tonight, we just can’t get hits at the right time.”

With the bases loaded at the top of the fifth inning, the Rebels scored the second run of the day thanks to a sacrifice groundout from Brandalon Rombokas that scored Bailey Allen. Another base hit increased Chambers’ lead to 3-0 in the inning. Lindsey Fuller also drove in a run for Chambers. Fielding errors allowed the Rebels’ third run of the game.

“We hit the ball,” Chambers Academy head softball coach Brandi Fuller said. “I told them that if we could hit the ball, things like that can happen.”

Megan Ware drove in the final run of the day for the Rebels with an RBI of her own.

Chambers Academy will host Evangel next Monday for a doubleheader to begin the postseason at 3 p.m. EDT.

“I feel very confident in our defense,” Fuller said. “We were hitting the ball [on Tuesday] better than we have the last several games. I feel good [about the playoffs].”

Springwood will host Northside at 4:30 p.m. EDT. for a doubleheader to begin the postseason. The Wildcats fell short against Northside 6-3 on March 16 at home earlier this season.

“We look forward to the task,” Smith said. “Our main goal, I tell my girls, is to get back to Montgomery. That’s our main goal, to get through Thursday [regular season finale against Macon-East], and then we’ll work on the playoff games Monday. We’ll see what we can do, I really like our chances Monday.”

ATLANTA — The Atlanta Braves (9-6) received some assistance from the mound to end this past weekend’s series against the... read more