Crowds gather to relive the battle of Fort Tyler 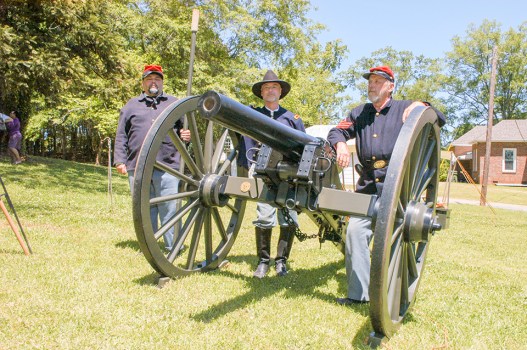 A Union Cavalry gun crew was among the living history presentations at Saturday’s Fort Tyler encampment. Members of the crew include, from left, Marty Hall, Lane Palmer and Jerry Franklin. Their three-inch Parrott rifled cannon can fire like the ones did in the U.S. Civil War. They are from the Columbus area and fire off the cannon at public events such as the start of marathon races and at programs at the Infantry Museum. 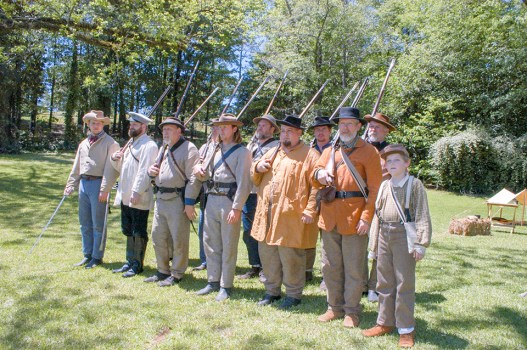 Representing the defenders of Fort Tyler were the Georgia-based Armory Guards. They include, in front, from left, Austin Mitcham of Lilburn; Charles Sunderland of Snellville, Paul Jerram of Roswell; Kaleb Orr of Duluth; Clint Morris of Newnan; Jim Kelly and son Isaac Kelly, both of Dallas. In the back row, Chris Henderson of Lilburn; Keith Bohannon of Carrollton; Jason Scoggins of Rome; Chadd Phillips of Newnan and Trace Scalf of Valley.

WEST POINT — April 2019 marked the 154th anniversary of the Civil War Battle of West Point and the fall of Fort Tyler. That event was commemorated by the Fort Tyler Association with a Friday evening dinner at the West Point Depot and a living history encampment on Saturday by solders in blue and gray at restored Fort Tyler.

Rebekah Bydlak and husband Jonathan were special guests at the Friday evening dinner. Thy live in Cantonment, Flordia, just outside Pensacola, and Mrs. Bydlak is a distant relative of Capt. Celestino Gonzalez, Fort Tyler’s second-in command who was mortally wounded in the April 16, 1865 battle.

Mrs. Bydlak is a direct descendant of Don Manuel Gonzalez, who was Capt. Gonzalez’s grandfather. The Gonzalez family were prominent citizens in Spanish Florida and the early state of Florida.

Florida had been a Spanish possession since the 16th century, but by the early 1800s was becoming more of a liability to Spain. Continual raids by the Florida-based Seminole Indians into the Southern states led to the First Seminole War in 1818. General Andrew Jackson led a campaign against the Seminoles with the result being U.S. control of east Florida. Increasingly reluctant to man garrisons on the Florida peninsula, Spain offered to cede it to the U.S. That took place in 1821 with the Adams-Onis Treaty. This transfer took place at the Gonzales Estate near Pensacola. Florida would become the 27th state in 1845.

Mrs. Bydlak told the Depot gathering on Friday that she and her husband had thoroughly enjoyed their visit to West Point and the hospitality they’d received.

“I found a cousin I didn’t know,” she said upon visiting the West Point Confederate cemetery Saturday afternoon and seeing Capt. Gonzalez’s grave. She said that the captain had been the mayor of Pensacola when the Civil War broke out in 1861. He joined the Confederate Army and served throughout the war. He was married to the former Louisa Gee Chapman from Mobile. They had four small children when Capt. Gonzalez was fatally wounded in the Battle of West Point. One of the children was born in 1865.

After the war, Louisa moved to the new city of Birmingham and was living there when she died in 1912. The children would migrate west, some to the Houston, Texas area and some to Butte, Montana. With four children, it’s likely Capt. Gonzalez has some direct descendants somewhere in the U.S. today.

Something new at this year’s living history encampment at Fort Tyler was a Union artillery piece and three soldiers to man it. Their replica cannon is identical to some of the Union artillery pieces that were at the Battle of West Point. Manning the cannon were Marty Hall, Lane Palmer and Jerry Franklin of Columbus, Georgia. They make lots of public presentations in Columbus. A blast from their cannon signals the start of marathon races. They also do presentations at the Infantry Museum.

On Saturday, they were portraying Union soldiers from the 4th U.S. Artillery Battery I. The 3rd Battery was in West Point on April 16, 1865, and fired upon Fort Tyler. Their cannon is a three-inch Parrott rifle type. Before the war, they were made for the U.S. Army at the Tredegar Iron Works in Richmond, Virginia. The original cannons were hand rolled and forged to specifications.

The three-man crew will be firing the cannon in a special event at the Infantry Center on July 4.

“We do what we do for camaraderie and history,” Palmer said. “We are here to educate people about what the Civil War soldier went through. They went through a lot back then.”

Representing the Southern side in Saturday’s encampment were the Georgia-based Armory Guards. They do living history presentations throughout the state. They include Austin Mitcham of Lilburn; Charles Sunderland of Snellville; Paul Jerram of Roswell; Kaleb Orr of Duluth; Clint Morris of Newnan; Jim Kelly and Isaac Kelly, both of Dallas; Chris Henderson of Lilburn; Keith Bohannon of Carrollton; Jason Scoggins of Rome; Chadd Phillips of Newnan and Trace Scalf of Valley.

Wally the War Horse was the star of Saturday’s encampment. Owned by Roger Wheatley of LaGrange, Wally is a 22-year-old chestnut mare with the energy of a colt. A Virginia native, Wheatley has ancestors who were with the Kentucky Volunteer Cavalry on the Union side.

Wally had a significant role in a documentary about the April 17, 1865, standoff between the Nancy Harts and Union forces under Col. Oscar Lagrange. Wally was the horse ridden by the colonel in the video presentation.