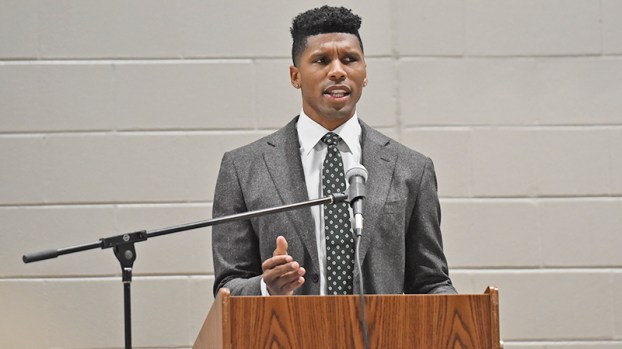 VALLEY — Former University of Alabama football player Brandon Gibson was the guest speaker at Friday’s business luncheon, which was put on by the Greater Valley Area Chamber of Commerce, held at the Valley Community Center. Gibson played for coach Nick Saban and played on national championship teams in 2009 and 2011.

Gibson said that Friday was his first time in Valley, and he said he enjoyed how polite the citizens were to him. When he arrived at his hotel at 2 a.m. after making a four-hour drive, an employee allowed him to eat some of the intercontinental breakfast early because all other local restaurants were closed.

Gibson’s message centered on leadership and choosing purpose over passion. Although his passion is football, he said that his purpose is in mentoring and encouraging others. He also said that Saban’s purpose is being a leader of young men.

In his speech, Gibson told a story of Saban calling him out in front of the entire team during a film session after a game against LSU. Saban repeatedly replayed and paused the clip asking Gibson if he knew what he did wrong.

LSU punter Josh Jasper had lined up eight yards behind the line of scrimmage on the play.

“All that week, I studied the punter,” Gibson said. “I studied film. He lined up at 10 yards. Every time they lined up at eight yards, they faked the punt.”

“When you pay attention to the finer details in life, they actually mean a little bit more than what you expect,” he said. “Your subconscious mind. Are you telling yourself to breathe right now? Are you telling your heart to beat right now? No, it’s your subconscious mind. The little things matter the most. Once I started paying attention to my surroundings, paying attention to what I was doing, the small things in life, I started to become a better person.”

Gibson shook hands, signed autographs and took pictures with many of the chamber members after the event. During his speech, Gibson stressed the importance of listening and giving every person that you speak to their full undivided attention.

“The golden rule, a lot of people don’t remember it but treat people how you want to be treated,” Gibson said. “Sometimes you’re the only Bible that a non-believer will read so the example that you set is what that person would perceive God to be. That’s what I always keep in the back of mind anytime I’m having a conversation with somebody. I just look at what would Jesus do.”

Tornadoes and high winds are possible on Sunday morning when a storm system moves through Alabama and Georgia. Meteorologist Jason... read more