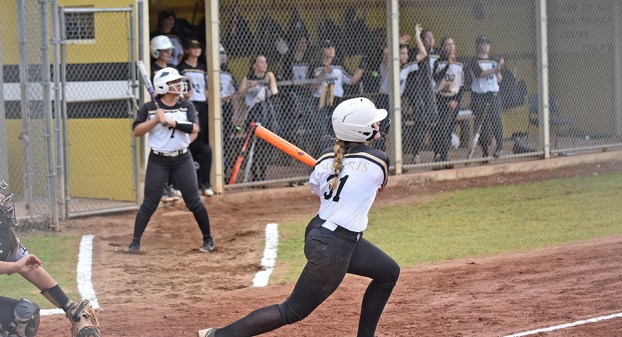 Bobcats freshman pitcher Katie Morris walked off the victory at the plate in the bottom of the seventh inning to drive in eighth-grader Savanna Clements for the winning run.

“I knew I wasn’t doing what I should have been doing while I was pitching,” Morris said. “When I got to the plate, I knew I had to clear my head and I had to get my girls to home [base.]”

Morris had to depend on the defense behind her often on Tuesday night in a game where she only struck out two Dadeville batters. Clements made three memorable catches herself, including one at the wall in the second inning and a pair of running catches in the fourth inning and at the end of the game.

“She had a big game,” Beulah head softball coach Stan Pepper said. “She had an off game for her in the previous game, and I think she came out here today wanting to make up for that. She did in a big way…when the other girls see that, it excites them, but it also lets them know that they have turn their efforts up to match her effort. That’s how she is.”

“[Clements] and her hit three and four [in the lineup], and they just compliment each other so well offensively and defensively,” Pepper said. “Our future’s really bright around here in the softball program.”

Beulah carried a 1-0 lead until the top of the fifth inning when Dadeville knocked in a two-RBI double.

The Bobcats answered the score in the bottom of the inning with a bases-loaded score on a play where Dadeville got a force out at second base. Beulah later dropped a two-RBI triple that bounced around Dadeville’s left fielder to give the Bobcats a 4-2 lead. A sacrifice ground out then gave Beulah another run to end the scoring outburst that looked like the moment of separation between the two teams.

Dadeville then opened the sixth inning with a home run over center field. Morris said that the encouraging words that she received from her teammates kept her on the hill, however.

At the top of the seventh inning, Beulah gave up a bases loaded-run on a wild pitch. Dadeville took the lead back with a two-RBI double that soared over the first baseman’s head and into right field. The 6-5 advantage from Dadeville set up Morris’ heroics in the bottom of the seventh.

Beulah travels to Randolph County on Thursday night for a chance to at least guarantee a tie in the regular season area championship.