John Ellis retires from the city of Lanett after 44 years 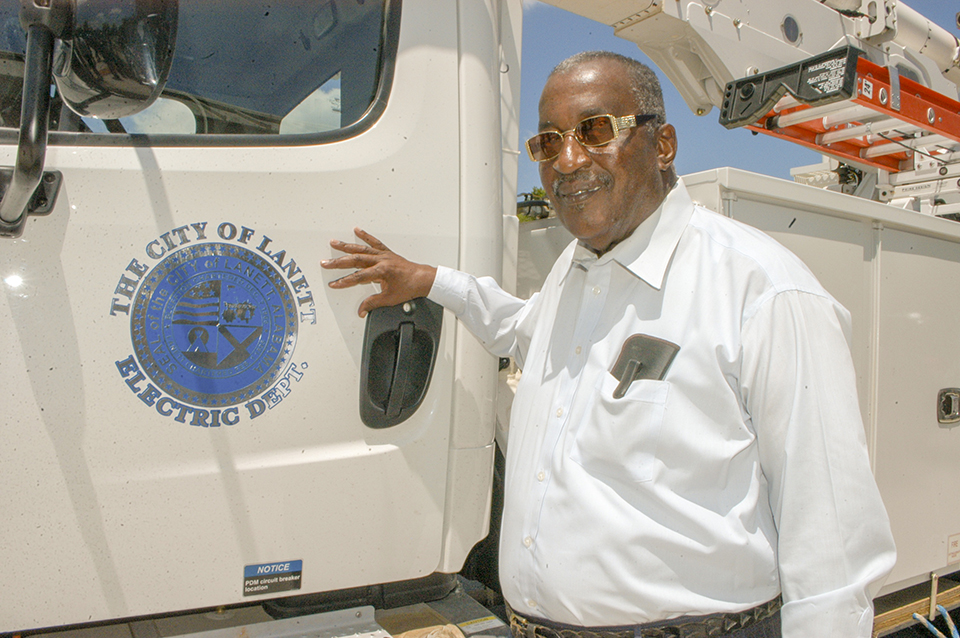 LANETT — Over 100 City of Lanett employees and well-wishers jammed inside the Jane Farrar Event Center in downtown Lanett Friday to wish a long and healthy retirement to a man who may have had the longest tenure of any employee in the city’s 124-year history. John Ellis has been with the city’s electrical department since 1975. He was 21 years old when he came to work for the city and remained until he reached the retirement age of 65.

“I guess I’ll be spending more time around the house. There’s plenty of work to do there, and I’d like to get in some fishing,” he said. “Y’all call me if you need me for anything.”

That may happen sooner than later. Ellis is the kind of guy that everyone goes to about Lanett’s electrical system. He knows where all the lines are and all the potential trouble spots. When there’s over 3,800 customers on the system, problems do occur, and everyone wants the power up and running in a hurry.

Ellis wore a blue suit and sat at the head table. He reminisced about many amusing events over the years and had everyone laughing at those stories.

Utility Department Superintendent Dave DeLee said that Ellis was one of the most dependable people he’s ever been around. He’s the kind of employee the boss knows something’s wrong when he doesn’t show up for work.

“One day, I had to go and check on him at his house,” DeLee said. “When I got there, I was told he was at the hospital undergoing emergency surgery for an internal infection. It scared me to death.”

“It scared me, too,” interrupted Ellis, breaking up everyone with laughter.

“He pulled though it OK, and that sure made all of us happy,” DeLee added.

“We had our good days and our bad days,” Ellis said. “We worked together like a family. We did our best to keep the power on in Lanett.”

The first year he was with the city, Lanett sustained a major hit from Hurricane Eloise. Twenty years later, another big one, Opal, uprooted lots of trees, brought down big limbs and left lots of power lines on the ground. It takes several days to clean up after that kind of a mess and a few days to have everyone’s power back on. Lanett has had its share of cold weather, too. Ice storms can make for long days for power crew guys; snow days can, too. One day back in January 1985 was especially harsh. The temperate dropped down to minus-8, an all-time local record. It was a night of pure misery for the water and natural gas guys, but the power line guys had their problems as well.

DeLee said it was difficult to say farewell to an employee like Ellis.

“It’s hard,” he said. “He was here when I was five years old. Lots of people have come and gone in that time, but he’s still here. He’s been on the front lines for a long time – 44 years. Working for the electrical department is like being with the post office — neither rain, sleet, snow nor gloom of night can stop you,”

McCoy presented Ellis with a gold watch and a plaque.

“We want to wish John the best in his retirement,” the mayor said. “This is a happy day for him. Most of you in this room today aren’t even 44 years old, but he’s been with the city that long, and he’s done so much for this city. His knowledge is immense. He can diagnose all kinds of problems and helps keep our power going 24/7. You’re not going to find a finer man than John Ellis. I am proud to honor him today and to call him my friend.”