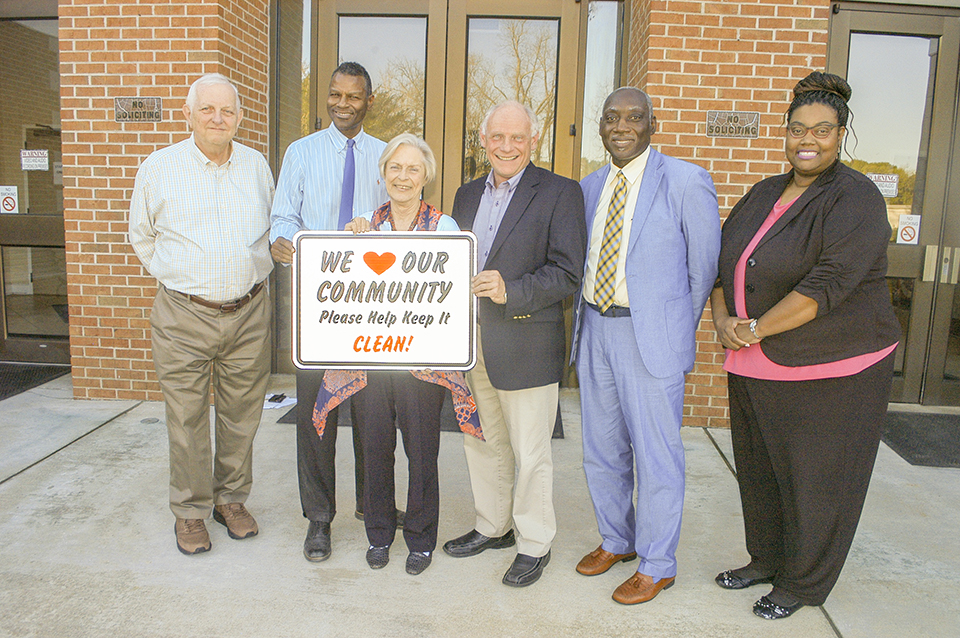 NEW SIGNS IN LANETT: More than one dozen street signs like the one above will soon be going up in Lanett. Council Member Tony Malone brought the first one to Monday’s Lanett council meeting and credited Terrence Reed with the idea. From left, are Council Members Charles Looser, Tony Malone and Shirley Motley, Mayor Kyle McCoy and Council Members Jamie Heard and Angelia Thomas.

Phillip Morgan, CPA, of PM & Company, Birmingham, t0ld the council that it was a clean report with no new findings.

“There are some weaknesses from previous years, but overall the city’s books and records are in excellent shape,” he said, commending Mayor Kyle McCoy, City Clerk/Treasurer Deborah Gilbert and Accounts Payable Clerk Kelly Walton for their efforts on behalf of the city.

“Compared to previous years, the city’s financial condition is in good condition,” Morgan said. “Everyone we worked with was very cooperative. There was no problem in getting anything we asked for.”

The city ended 2018 with an estimated $8.5 million with current and other assets and $15 million in capital assets for total assets of close to $25 million considered, a good figure for a city the size of Lanett.

Morgan noted that the city’s debts are declining while the assets are increasing – a positive trend.

“It’s good to have debt going down while assets are going up,” Morgan said.

A big factor in increased revenue was in the form of grants for the downtown streetscape project and the airport project.

“There are lots of healthy trends,” Morgan said. “You are trending in the right direction. The new sidewalks, lighting and resurfaced streets are benefits to the city. There’s $1 million left to be spent on street projects. There’s no problem the way funds have been expended on the airport. The spending is in compliance with state and federal regulations.”

“The city has improved its net position some $3 million overall in the past year,” Morgan said. “Overall, the city had a very good year with no findings in the report.”

McCoy thanked the city’s department heads on having good work in staying within their budgets.

In business at Monday’s meeting, the council approved resolutions to replace a wrecked police vehicle, to open new accounts related to the airport project at AuburnBank and approved an off-premise beer and wine license.

A 2018 Ford Interceptor sedan will be replacing a 2013 Ford Taurus that was totaled in a mishap. The new vehicle is being purchased off a state contract from Stivers Ford Lincoln Mercury, Montgomery, for $21,885.

The new beer and wine license is in the name of Mustafa Chowdhury and is needed due to a change in the name of the business. It’s going from Huguley Package Store to Huguley Management DBA Big Cat Lanett.

Council Member Tony Malone displayed one of approximately a dozen street signs that will be going up in town. He thanked Lanett resident Terrence Reed for suggesting the idea.

“He was concerned about littering in the city and thought a sign like this might make a difference,” Malone said. “He told his father, retired Chambers County educator Terry Reed, about this, and he contacted me to see if we could get some signs up encouraging people to do something about littering.”