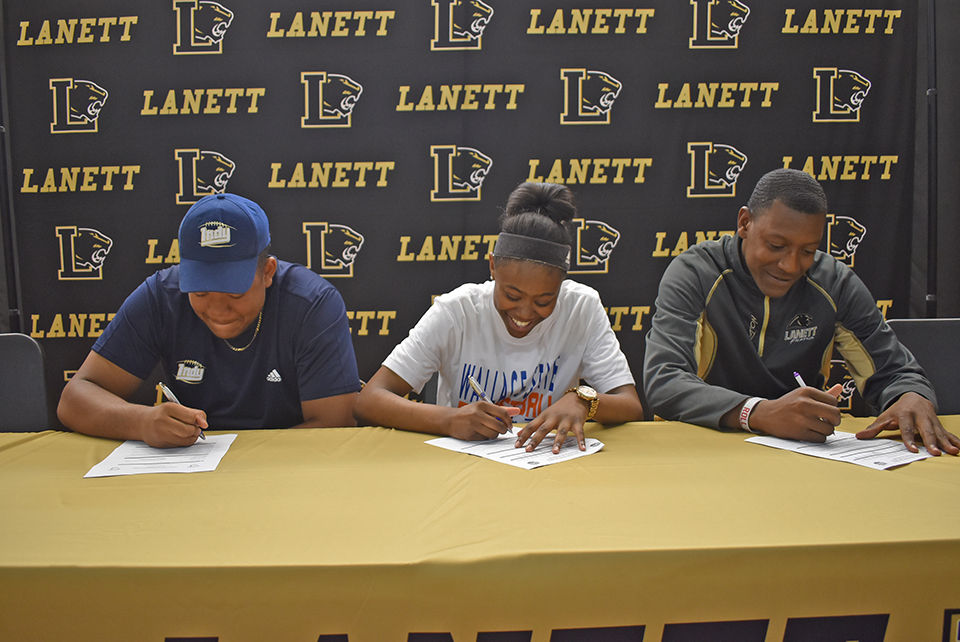 LANETT — Three more signings on Thursday afternoon solidified the Class of 2019 the second-largest class of signees in the last five years of Lanett High School. The event marked the third signing ceremony this academic year alone.

“We’ve gotten quite accustomed to doing this for a while at Lanett High School,” Lanett athletic director Clifford Story, Jr. said. “This year put us close to over 60 athletes over the past nine years. We worked so hard to give kids an opportunity to go further in their academic and athletic careers.”

Lanett seniors Kane Brumbaugh, Makaiya Broughton and Jayshon Burton all signed their letters of intent to further their athletic careers in college on Thursday.

Brumbaugh is headed to Independence Community College in Independence, Kansas to play football. The offensive and defensive lineman began his career at Valley High School before transferring to Lanett. He was injured for most of his junior season, but came back just in time to play in the Panthers 2017 state championship game.

“It feels good to get an opportunity to get on the field and play one more time,” Brumbaugh said. “We all worked hard and it took a lot of things for us to get here, but we still made it to this point and now we all have scholarships.”

After receiving his degree from Independence, Brumbaugh aims to finish his college career playing at an SEC school like his uncle Jimmy Brumbaugh did at Auburn. He also left a few words of wisdom to the younger Lanett students.

“It starts in the ninth grade,” Brumbaugh said. “Do not mess up your GPA, and keep your grades up. Study for the ACT, and everything else will fall in place.”

Burton signed to go play basketball at Highland Community College in Highland, Kansas. The 6-foot-6 forward admitted that there was a time where he doubted his will to want to continue playing basketball because the other Panthers were in better shape than he was in early season workouts. Burton said that his backup plan was to enlist into the military, but he found out all of the conditioning that we required in that field as well, so he decided to stick to basketball.

Former Panther teammate and current track freshman at Highland Braylon Harrington gave Burton of the athletic scene on campus before his commitment.

“Braylon was telling me what the basketball team would do, all the running they would do and their offseason workouts,” Burton said. “They’re a pretty good team also. I was going to go up there to be with Braylon because he’s a pretty good person, too. I believe he’ll keep me on the right track to get my grades and all.”

One of Burton’s biggest games during his senior season came in the area tournament championship win over Wadley when he led the Panthers with 21 points. After receiving his degree from Highland, Burton said that he would like to play at the University of Tennessee and make the NBA.

Broughton walked into the auditorium before the signing event a few minutes shortly after the class bell rang on Thursday. She greeted her family members while wearing her school uniform, a backpack, holding a math assignment and carrying a pencil by her teeth. Broughton’s family members recommended that she’d show off her Wallace State Community College shirt once she got on stage to represent the school in Hanceville that she signed to continue playing basketball.

Like Burton, Broughton had a moment in high school where she was unsure if she would continue playing basketball. She said that she was ready to join the military and serve the country. After reconsidering her decision and staying on the team, Broughton said that she wouldn’t have grown as much as she has under Lanett girls head basketball coach Charlie Williams.

Lanett sophomore Alysse Madden embraced Broughton with a big hug after the girls basketball team took a picture with the senior on stage at the signing table.

Something that she was on the verge of walking away from is now the thing that she’s going to miss the most at Lanett.

Lanett High School’s graduation is on May 24.