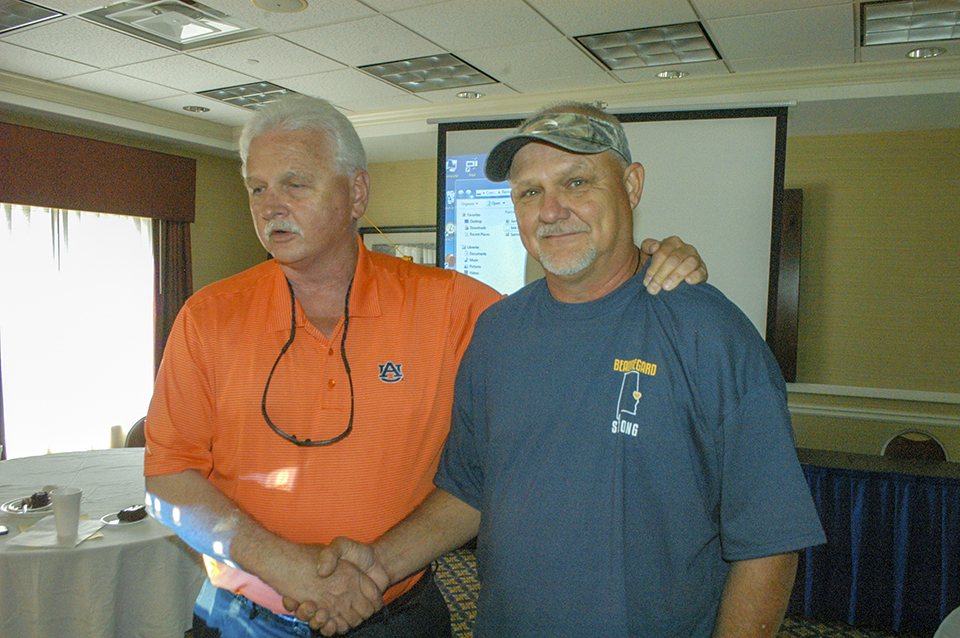 LANETT — A survivor of the March 3 tornado that killed 23 people and destroyed 52 homes served as the guest speaker at Thursday’s meeting of the West Point Rotary Club. Keith Miles has local ties as he grew up in the Todd Addition neighborhood in Shawmut and graduated from Lanett High School in 1977. He’s now a field tech for a compressed air company and lives with his wife, Belinda, and his son, 12-year-old Nicholas, on Lee County Road 38 in Beauregard.

Miles was home with his son and his school friend Sky that Sunday when he received a call from Belinda.

“She told me that we were under a tornado warning,” he said. “I’d known that bad weather was in the forecast. It had happened before but had always been really bad somewhere else.”

Miles went outside to look around, and Sky’s mom Melinda called to tell him that bad weather was imminent and to make sure the children were protected. As he was going back to his mobile home, the power went off and he heard that dreaded sound only a tornado can produce.

Inside, he quickly got the two children to lie down on the floor and flipped a couch over them to protect them. He briefly looked outside to see a large pine tree fall and heard the sounds of many trees snapping in winds that were topping 170 miles per hour.

“It was like everything turned white. It was a blur,” he said.

Miles then sat down on top of the couch to protect the kids and said to himself “this ain’t good, this ain’t good” as the storm raged outside. “It was so loud, but it was over in a minute-and-a-half.”

Once it passed, Miles went outside the look around.

“It looked like a war zone,” he said. “There were so many trees down and so much debris I couldn’t see the road in front of my house. On the other side, I could see a neighbor’s house you couldn’t see before because of the trees. Those trees were down now.”

He saw that a tree had come down on his shop building and that a chicken pen had been destroyed.

“Most of my chickens were gone,” he said. “The only two that were there were dead and all their feathers had been removed.”

Luckily, the trailer was intact and had sustained only some minor vinyl damage, but Miles and the two children were okay.

While he was trying to let it all sink in, he got a call from Belinda with more bad news — a second tornado had been spotted following the same path as the first one.  This meant putting the children back under the couch, sitting on top of it and praying to be lucky for a second time.

Miles immediately knew that almost everyone in the neighborhood had experienced devastating property damage, many people had been injured and that power would likely be off for some time to come, but it didn’t dawn on him that there had been fatalities until he saw Lee County Coroner Bill Harris on the scene and a covered body. That would be his good friend Lynn Grimes.

Ironically, Grimes had been on Lake Martin that weekend with friends and family and had decided to return home to Beauregard because bad weather was in the forecast.

Miles later found out that a young couple who was planning to be married had been killed not far from his home.

“They lived seven driveways away,” he said.

Miles wept when he recognized a good friend on a news report telling the tragic story of having a grandchild ripped from his arms. One East Alabama woman had a double tragedy only a few days apart. A little over a week from the time the body of her murdered son was pulled from a creek in Lanett, the woman lost her home in the March 3 tornado.

More than 100 people were injured, some having lengthy stays in the hospital while recovering. The Lee County death toll was twice the number of all U.S. deaths by tornadoes in 2018.

The tornadoes left an astonishing amount of damage. In some places, swaths of large pine trees were blown down and debarked. Numerous manufactured homes were obliterated with debris scattered in all directions and metal framing twisted around surviving trees. Multiple vehicles had been blown through the air and mangled beyond recognition upon impact. Some vehicles were wrapped around trees. A large semi-truck had been flipped over and wrapped around the base of a tree.

Perhaps the most intense damage was inflicted to a well-built, anchor-bolted brick home. It was completely leveled with a portion of the slab swept away by the tornado.

Some people barely yards away from destruction got a bird’s eye view they’ll never forget.

“Dale Thompson told me he saw both tornadoes come through from his front porch,” Miles said.

Another friend named Bobby had two children injured by the storm. While they were on the way to the hospital and Bobby was driving back home, the second tornado blew his truck around in the road and wrecked it. He was lucky to walk away from it.

For several weeks, residents of the neighborhood had to have special badges to get in and out while the cleanup work was going on, It will take many months to clean up the debris, but scars will remain for many years to come.

Miles was highly complementary of the work done by Alabama Power in getting electricity flowing again.

“They had new poles in the ground, wires in place and power restored very quickly,” he said.

Six of Miles’ neighbors were among the 23 people killed. The experience has made him a changed man.

“I thank God every day I can get up and put my feet on the floor,” he said. “We now have what we call Beauregard strong. Everybody has been so nice. Everyone wants to help. The bad side is that there has been some looting going on. Some people who shouldn’t be here have been going through what’s left of the woods to see if they can find something.”

Miles has found the time to go to church.

“God had his hand on our home that day,” he said.

Miles also got a good look at Donald Trump, when he toured the tornado damage.

“I am proud the president of the United States came to Beauregard and rode right past my house,” Miles said. “I was standing by the road and got a good look at him as he was waving to everyone.”

The president met with family members who had lost loved ones at Providence Baptist Church. He autographed some of their Bibles.

Miles said he has been overwhelmed beyond description by the generosity of those trying to help. The East Alabama Medical Center’s foundation has provided furnished apartments for many of those who lost their homes. It’s at no cost to the families, and they will be able to keep the furniture once they find permanent places to stay.

EAMC is also partnering with the Chattahoochee Fuller Center Project on building some new CFCP homes in Beauregard. They will start with three and could have as many as nine.

“There are some beautiful stories coming out of this,” Miles said.

“I can’t imagine what you have been going through,” said Club President Gus Darden. “Everybody is with you on this. I know that lots of churches have made donations to help.”