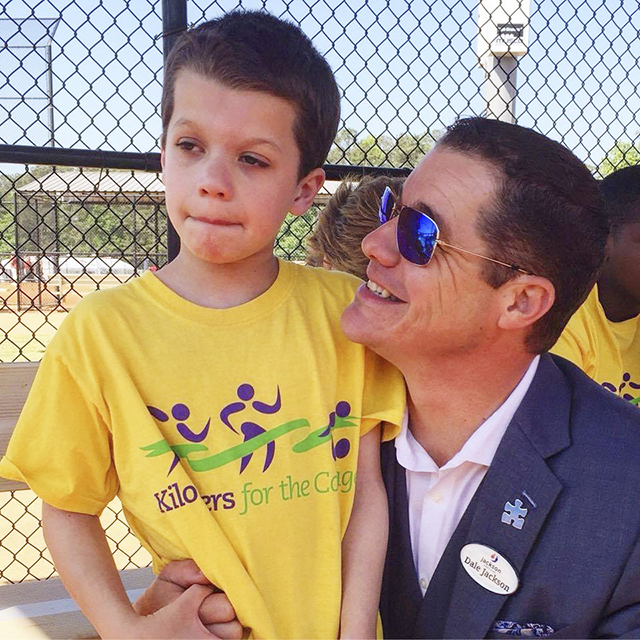 Dale Jackson poses for a photo with his son Colin, who has autism. — Contributed

Years ago, Dale Jackson never thought he’d be put in a position needing to break the law in order to get THC oil, the main active ingredient in marijuana, back to Georgia.

However, Jackson, a law-abiding, local business owner in LaGrange, has regularly found himself in that situation over the last five years and in that time has become a statewide advocate for the legalization of medical marijuana. Jackson’s son, Colin, has autism and low-THC oil has proven to drastically change his behavior and improve his quality of life.

Now, Jackson is hoping his time having to bypass the law is close to over.

House Bill 324, which would legalize medical marijuana in Georgia, passed the state Senate  and House on Tuesday. It will now become law if signed by Gov. Brian Kemp.

The bill grants six growing licenses to private companies — two for large organizations and four for smaller organizations. The original bill that passed the House included 10 licenses, but the bill has been reworked several times over the last few weeks.

The bill also allows for two universities — the University of Georgia and Fort Valley State — to receive licenses for research.

“It’s almost so hard to believe that it hasn’t even sunk in yet,” Jackson said. “We have been at this for so long, and we have been beat down for five years in a row, and now we’ve done it. I honestly just can’t believe it.”

There are still obstacles that remain. For instance, a state board has to license the dispensaries and patients will still have to be able to buy the medical marijuana from somewhere.

Pharmacies will be given the first chance to sell medical marijuana, but the drug remains a Schedule 1 controlled substance under federal law, meaning many pharmacies are unlikely to get involved.

However, the bill is still seen as a major step forward for anyone in favor of medical marijuana use in the state. The previous law allowed limited possession of low-THC oil by anyone with 16 specific conditions and a THC registry card, but it was illegal to acquire or transport the product into the state.

Unfortunately, that reality put Jackson in many awkward, illegal situations over the last few  years, since the law in Georgia left more questions than answers.

Jackson said it was a fairly regular occurrence for him to make transactions in parking lots, with people he had just met.

“It hit so many different points of our life over the last five years, from breaking serious laws that you have to consider, ‘Is my safety in jeopardy in here?’ whether it be Colorado, Washington or Oregon,” Jackson said. “I am literally scrounging up $5,000, $10,000, $15,000 in cash and meeting with people in parking lots and then handing it to them and trusting them to come back with medicine.”

During one frantic situation, he gave a man $15,000 and stood in the Denver International Airport waiting for that man to return with bottles of concentrated THC oil.

The man was 90 minutes late and Jackson’s flight was about to leave. With few options, he wondered if he’d been duped out of his money and would fly home empty handed.

However, the man arrived just in time and Jackson received the oil, which he then had to manage to get through the airport, technically breaking federal law.

“I’m having to wrap stuff in plastic and wipe it down with rubbing alcohol and shove it in bags, tape it and then shove it in more bags and tape it up. At this point, I can’t even check it in my luggage because the flight leaves in 40 minutes,” Jackson said. “I’m now running through the airport full of drug-sniffing dogs with thousands of dollars’ worth of concentrate to bring it back to Georgia, to not only help my son, but to help other families have access to medicine in Georgia.”

Jackson said he couldn’t go into professional manufacturers and buy large quantities of medical marijuana because in Colorado its illegal for anyone to buy more than one ounce a day.

It was also technically illegal for him to buy anything for his son, since autism wasn’t covered under state law until Tuesday.

“[Manufacturers] wanted to help me, but they couldn’t because they couldn’t put their $10 million operation at risk just to help a family they didn’t know. So, even when I went to Colorado, I still had to go to the black market,” Jackson said. “It was just more readily available than the black market for medical oil here in Georgia.”

HB324 does not legalize recreational marijuana, although opponents of the bill fear legalizing medical marijuana is a step in that direction. All local representatives voted in favor of the bill.

“There was a huge difference in this year and the previous four years,” Jackson said.