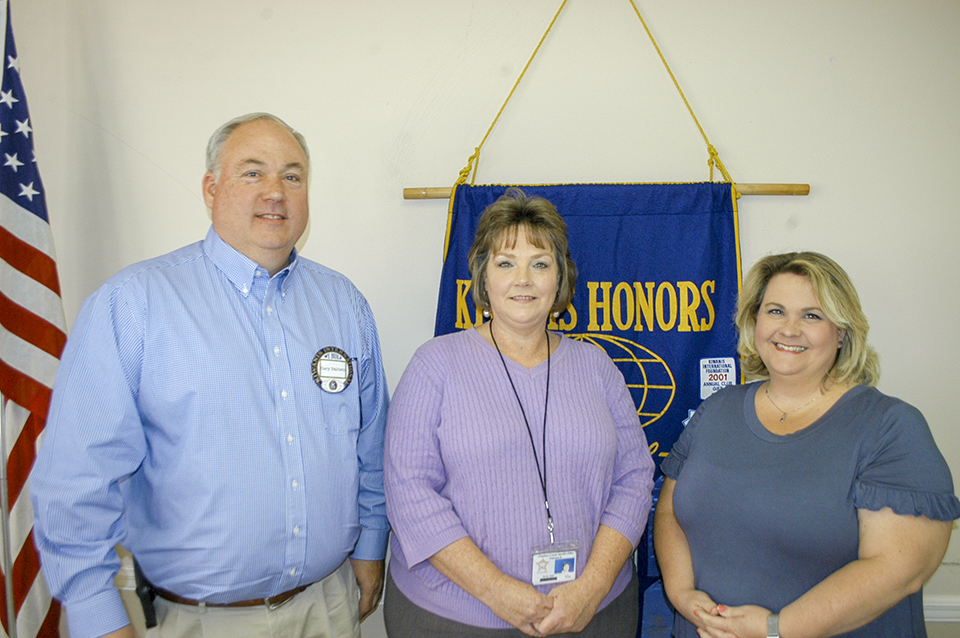 Chambers County’s new revenue commissioner, Beth Abney (at center), was the guest speaker at Wednesday’s noon hour meeting of the Kiwanis Club of Valley. Abney was appointed to the position by Alabama Gov. Kay Ivey following the retirement of long-time Revenue Commissioner Wendy Williams, who had been in office for more than 20 years. Abney is now in her 21st year of working in the office. She is shown above with Cary Baldwin, the program chairman (left), and Nancy Warren-Holland, club president (right).

VALLEY — Chambers County’s new revenue commissioner, Beth Abney, was the guest speaker at the Wednesday meeting of the Kiwanis Club of Valley and discussed a broad range of property tax-relied issues. Abney has worked in the office for more than 20 years and succeeded Wendy Williams, who retired at the end of February after more than 20 years as the country’s revenue commissioner.

Abney lives in the Penton community with her husband. They have several adult children and several grandchildren.

Abney told members of the club that tax policy is spelled out in the Alabama Code (1975) and that a copy of that book is in the revenue commissioner’s office and is referred to should a complex property tax-related issue come up.

According to state law, property is reappraised every four years. This took place in Chambers County in 2018 and won’t take place again until 2022. Generally, the property tax bills were higher this past tax year than they were before. The new bills, in part, reflect a four-mill increase approved by Chambers County voters in 2014 to help EAMC-Lanier Hospital.

“That has really helped the hospital, and that’s what the voters wanted,” Abney said.

Property tax day in Alabama is Oct. 1. It’s the start of a new fiscal year, and the property taxes you will pay is based on the condition of your property that day.

“If your house burns down on Oct. 2, it’s still taxed on the way it was the day before,” Abney said. “It may seem unfair, but that’s the law.”

There are 26,000 parcels of land in Chambers County. Determining the value of each individual parcel is the job of two full-time appraisers and a mapper.

Each year, the appraisers look at 25 percent of the property in the county. If someone’s property is being assessed that year, and they’ve done something to increase the value of their land, such as build a pool in the backyard, their taxes for the next year will include that.

“Some people aren’t happy with the value that’s been assessed,” Abney said. “If you’re not happy, you should appeal it to the board of adjustments. You can call us at our office, and we’ll tell you how to do that.”

The board meets once a year, usually in July, and the property owner must have had an increase in their property value of at least $500 before the board will consider their appeal.

Landowners who fail to pay their property taxes can lose their land in a tax sale. This year’s tax sale day is April 23.

Abney said there are close to 250 property owners in Chambers County who haven’t paid their 2018 taxes. If past history is a guide, that number will likely dwindle down to less than 100 when the property is sold to a high bidder at the county courthouse.

Abney advised any potential buyer to talk to an attorney to understand their rights before they take the plunge to buy property at a tax sale. In Alabama, the present property owner has three years of redemptive rights. There are situations when someone buys land at a tax sale and think they own the land only to find out later that the original owner has gotten it back. Sometimes, a judge has to decide who the rightful owner is.

There’s also the problem of someone building a new house and not reporting it to the revenue commissioner’s office. There have been cases where a property owner built a house on land in a remote location and didn’t report it and the revenue commissioner’s office found out about it seven or eight years down the road. They can tax you not only for the value of your land, including that new house, and go back and tax you on the previous years you had it.

“We get a lot of useful information from neighbors,” Abney said. “It’s especially true when they find out they’ve been paying higher taxes than that person who has the new house we didn’t know about.”

Abney said many property owners make a mistake when they don’t file for homestead when they purchase a new home. They’re also making a mistake when they don’t contest increased taxes on their structure. Sometimes, unfair taxation can be straightened out by a visit to the revenue commissioner’s office. Abney mentioned a situation where a property owner saw a tax increase even after a building on the property had been condemned. When the owner pointed that out, the taxes were reduced.

The revenue that’s collected is allotted to different agencies based on percentages called for by state law or approved by local government. Of the 42.5 mills that are collected countywide, some 16.5 mills go to public education. The City of Lanett is a 52,5 mills because of 10 mills going to the city school system.

Abney is filling out Williams’ unexpired term, which ends in 2021. It’s a six-year term that will be up for election in 2020. Abney said that she intends to run fro a full term.