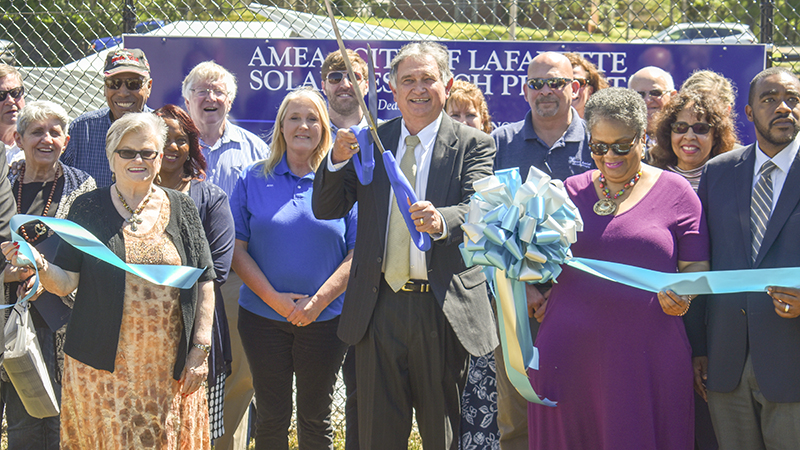 LaFAYETTE — There was plenty of opportunity for new solar panels in downtown LaFayette to generate power Wednesday afternoon, as the sunshine was abundant during a ribbon cutting for Alabama Municipal Electric Authority and the City of LaFayette’s Solar Research Project.

The ribbon cutting, hosted by the Greater Valley Area Chamber of Commerce, took place just outside Farmers and Merchants Bank in LaFayette, which donated the land to the electric provider.

The solar facility in downtown LaFayette is a result of AMEA wanting to eventually move into large-scale solar projects with thousands of panels, according to AMEA President and CEO Fred Clark Jr.

However, during a board of directors meeting in Montgomery a couple years ago, LaFayette City Clerk Louis Davidson told Clark that LaFayette wanted solar power inside its city limits. As a result of more talks, AMEA decided to put a facility similar to the one in LaFayette in every member community. Lanett, Alexander City, Dothan, Fairhope, Luverne, Opelika, Piedmont, Riviera Utilities, Sylacauga and Tuskegee are all member cities.

According to Clark, the project consists of 160 solar panels on nearly 1 acre of land that will put off 50 kilowatts. According to the AMEA, the output from the project will be placed on the local power grid and becomes part of all electric generation that is attached to the system.

“AMEA through this solar project is helping to look at alternative sources of generation to try and meet our future needs,” Clark said.

The AMEA Board of Directors authorized $1 million to build the 11 facilities. The LaFayette project has a price tag of about $85,000, Clark said. Although the project is live, Clark said the research AMEA is hoping to receive will not come for about 20 years and the output from the panels will mix in with all electricity generated in LaFayette.

“Every customer of LaFayette will get a little bit of the energy that is put out by this facility,” he said.

Clark said measurements depend on the amount of sunlight and the amount of power a home is using, but 50 kilowatts will power about five to ten homes a day.

“We are excited to be about to impact in a low-cost way the lives of our consumers to try and keep electric rates as low as possible,” he said.

“If it were cloudy, this wouldn’t produce anything,” Clark said. “It takes sunlight.”

LaFayette Mayor Barry Moody said the city has had a great partnership with AMEA for many years and that Wednesday was a historic day because it’s the first solar facility in downtown LaFayette.

“We are excited about the direction that LaFayette is going,” he said. “Our goal as a council is to work to continue to improve the quality of life for the citizens of LaFayette.”

The solar project is owned by the AMEA, which is a nonprofit agency providing wholesale power to 11 cities in the state. However, each municipality holds a seat on the authority’s board of directors and has input into all decisions made.

The city also didn’t bear any cost into the construction of the project nor will it be responsible for the maintenance of the property. That responsibility falls to AMEA.

The project in Lanett is scheduled to happen later this year, Clark said.

Lanett Mayor Kyle McCoy said the city hasn’t finalized its location. He said the city is looking at several options, including by the high school, near Highway 29 or potentially fostering a partnership with a business in the community for the panels.

Solar panels are safe to the community, according to AMEA. Additionally, the authority said there will be no trucks coming and going every day after construction is complete.

“There are no air emissions from the facility. There are no chemicals,” AMEA said in a news release. “The power will leave the solar project on lines just like the power lines in your neighborhood.”