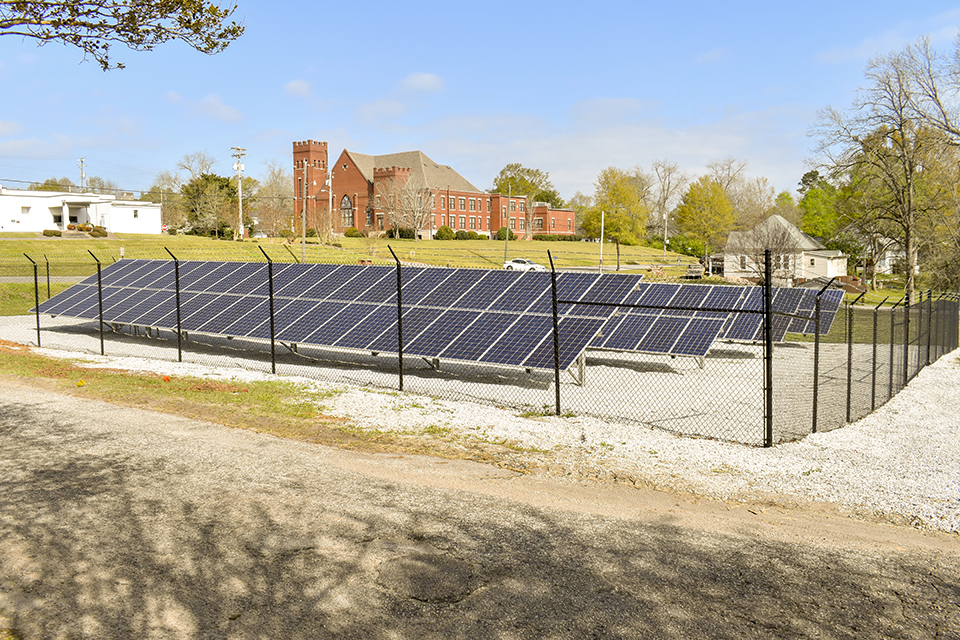 LaFAYETTE  — The city of LaFayette has teamed up with the Alabama Municipal Electric Authority to construct a 50-kilowatt solar project just outside of Farmers and Merchants Bank in LaFayette.

A ribbon cutting involving the city and the electric authority will be at 11 a.m. CT on Wednesday, April 10. A sign will be erected Friday morning just outside of the solar panels, according to AMEA Communications and Marketing Manager Lisa Miller. The project was completed in February.

The project in LaFayette is one of 11 projects and part of a $1 million investment in each of the electric authority’s member cities, including a project happening in Lanett later in the year.

The project consists of 160 solar panels on nearly 1 acre of land that will put off 50 kilowatts. According to the AMEA, the output from the project will be placed on the local power grid and becomes part of all electric generation that is attached to the system.

The electric authority said the solar panels will have little impact on resident’s electric bills in LaFayette. AMEA called the construction of the solar panels a “fact-finding” effort to better understand all aspects of solar generation.

LaFayette Mayor Barry Moody said the city is pleased to have a large solar farm in its backyard.

“We are very fortunate to have one of the largest solar facilities in the southeast located in LaFayette,” he said.

Moody said he feels AMEA will be able to collect large amounts of data from the LaFayette project due to the long hours of daylight in eastern Alabama.

AMEA President and CEO said the project in LaFayette helps to spread renewable energy in the region.

“We are proud of the new solar research project in LaFayette as part of our effort to enhance renewable energy in our portfolio,” Clark said in a news release. “We want to thank the City of LaFayette for its leadership and partnership in this endeavor.”

The solar project is owned by the AMEA, which is a nonprofit agency providing wholesale power to 11 cities in the state. However, each municipality holds a seat on the authority’s board of directors and has input into all decisions made.

The city also didn’t bear any cost into the construction of the project nor will it be responsible for the maintenance of the property. That responsibility falls to AMEA.

The project in Lanett is scheduled to happen in the third quarter of the year, Miller said, and the city is expected to choose the location of the project.

Lanett Mayor Kyle McCoy said the city hasn’t finalized its location as of Tuesday. He said the city is looking at several options, including by the high school, near Highway 29 or potentially fostering a partnership with a business in the community for the panels.

“It is one of those things we are still looking at several options,” he said.

Solar panels are safe to the community, according to AMEA. Additionally, the authority said there will be no trucks coming and going every day after construction is complete.

“There are no air emissions from the facility. There are no chemicals,” AMEA said in a news release. “The power will leave the solar project on lines just like the power lines in your neighborhood.”