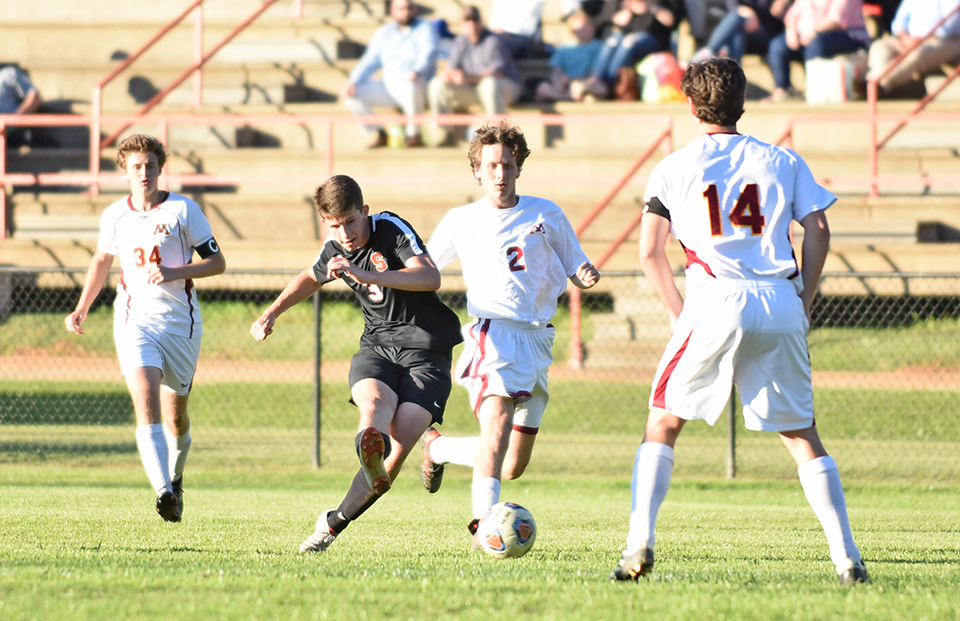 THREADING THE NEEDLE: Springwood junior Jonah Kelley attempts a shot on goal in the second half against Morgan Academy on Monday evening. Photo by Rashad Milligan

“It feels amazing,” Springwood head soccer coach John Lanier said. “The guys came out and gave effort, that was a good quality team we played that really wanted to win as well. I’m proud  of our guys for the effort that they showed and giving 110%.”

Wildcats junior Jack Brown scored the first goal of the game at 31:12 in the first half. The opening score was assisted by sophomore Kannon Key.

Brown led Springwood with two goals in the game. He said that the key to his big was the way that Morgan’s defense game planned around junior Coleman Hull. Hull, who scored in the first half on Monday as well, has been Springwood’s leading goal scorer all season, and the defensive-minded opponents had two or even three defenders on him near the box.

Hull assisted Brown on his second goal of the game with 5:54 remaining in the second half.

“They crowded up on him a lot,” Brown said of Morgan’s method on Hull. “He would just pass  it to me and I’d have an open shot.”

Brown’s multi-goal game was the difference in the score after Morgan connected from deep on a free kick with 4:04 remaining in the second half. With the victory, Springwood is heading to the Auburn University at Montgomery for the AISA soccer final four.

“I never thought that I’d be able to say that I was the leading scorer in a playoff game,” Brown said, “but here we are. I’m really excited to get the opportunity to get to go to Montgomery. All of my teammates played really well. I’m just excited for what’s ahead.”

Monday’s postseason matchup brought out a strong showing from the Wildcat faithful in the stands to support the boys’ program that is only in its second year of revival. Outside of the gated field of play were local children kicking a soccer ball to one another.

“I grew up in this area, and soccer was not really an option,” Lanier said. “You see it a lot more with the youth, the kids and this next generation. It’s the most popular sport in the world and it’s growing in popularity here. These guys success only helps guys wanting to get more involved and coming here to play.”

Springwood will play Glenwood School on Thursday in Montgomery.