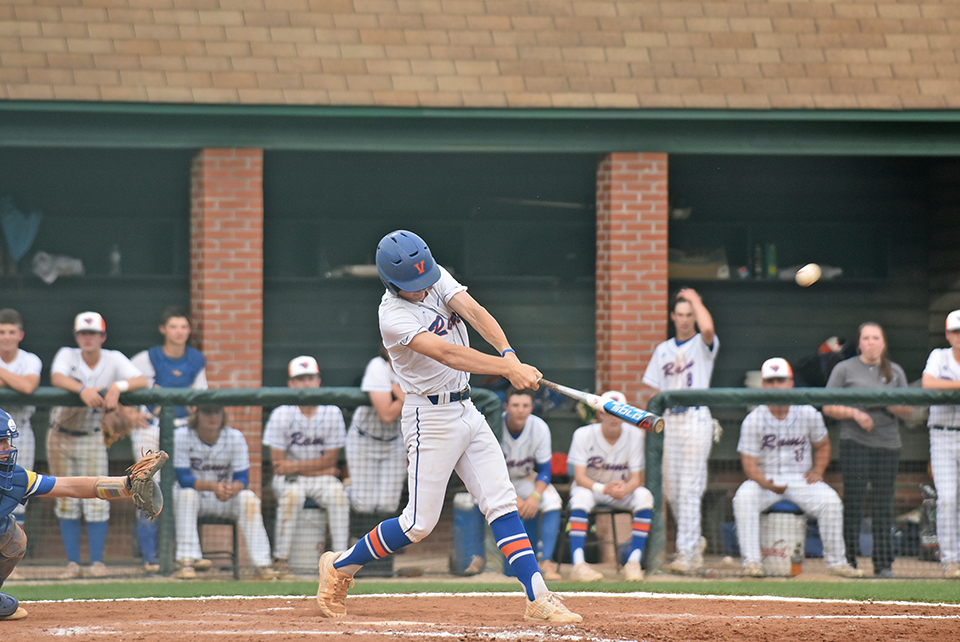 KENNEDY CRUSHES: Valley sophomore Will Kennedy hits a ball during Game One of a doubleheader against Beauregard on Friday evening. Photo by Rashad Milligan

The Rams went on to beat Beauregard in the first game of a doubleheader 5-1, and Brewbaker came back to upset Tallassee to make the Rams’ slight playoff chances a reality this season.

“Good clubs find a way to win,” Valley senior Andrue Davis said. “We knew we were going to make it to the playoffs, so a[n area] championship doesn’t mean anything, it’s about what you do in the long run.”

Valley also won Game Two of the doubleheader 18-1, which had no impact on either team’s playoff status.

The Rams came out with a different mentality with the last ounce of postseason hope remaining on Friday.

“I told the guys that as long as there’s a chance, I’m going to get my ‘A’ game, bring your ‘A’ game [on Friday],” Valley head baseball coach Patrick Shivers said. “That fact was proven today that in baseball, anything can happen. Anybody can beat anybody.”

Valley broke free from a 1-1 tie in the bottom of the third inning with two runs. The Rams scored insurance runs in the fourth and fifth innings as well to seal a victory in Game One against Beauregard.

“I think we just had the energy over them today,” Davis said. “They came out flat, knowing that they had their spot secured and didn’t really think of if we beat them, then we have a playoff spot. They came out dull, and we took advantage of their dullness.”

The season continues for seniors Davis and Cody Lumpkin, who have both returned to the Valley team in recent years after being away for two seasons. Davis transferred from Valley after eighth grade before transferring back for his junior season. Lumpkin missed his sophomore and junior seasons after suffering injuries and being involved in a four-wheeler accident.

“I’ll be straight-up honest with you, I’m the happiest man in the world,” Lumpkin said. “That’s all I can say about that.”

Davis threw a complete game on the mound in Game One, while Lumpkin led the Rams with four RBIs in Game Two on Friday.

There hasn’t been an area opponent that has defeated Valley twice in a season over the last three years.

“That’s pretty special,” Shivers said. “The state really needs to go back, look at the area rules, look at the area series’ and they need to start counting all three games toward the area record, or you need to count it as what it is, a three-game series and not just make it ‘the first two games mean the most.’ We’ve taken two out of three games  from all of our area opponents, and we’re the [area champion] runner-up.”

The playoffs begin the weekend of April 19-20.