Valley Community Center indoor pool expected to reopen in May 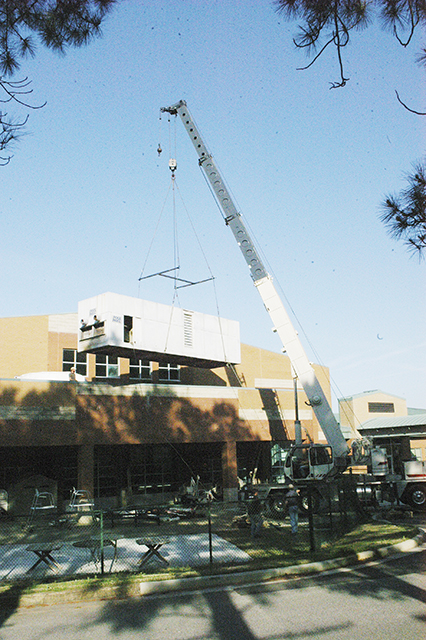 VALLEY — Upgrades are continuing on the Valley Community Center indoor pool, and work is on schedule for the pool to be reopened by May 13, shortly before the Valley Area Swim Team’s 2019 season is set to begin.

One of the significant tasks left was taken care of on Thursday. The Henry Hudson Company’s big crane was brought in to remove the 13-ton Pool Pak from the Community Center roof and to replace it with a new one that’s not quite as big but is more efficient than the old one.

A Pool Pak is an essential piece of equipment for a pool like the one at the Community Center. It helps to keep an ideal water temperature while making sure there’s a correct chemical mix. It has a life cycle of approximately 18 years.

The one replaced had been there since the Community Center opened in 2002.

“We got good use out of it,” said Valley Parks and Recreation Director Laurie Blount. “It was only half working when we stopped it to do some much-needed repair work.”

The 260,000-gallon pool is currently empty. Contractor Gunderson of the metro Atlanta area has removed the old tile from the bottom of the pool and replaced it with new flooring. During this work, it workers discovered that the top coat was starting to chip. This meant putting in a new base coat, and the new tiles are expected to adhere it better than the old ones.

“It was an additional cost we weren’t expecting, but it was something we needed to take care of,” Blount said. “The new tiles will last longer this way.”

The spa area located between the main portion of the pool and the shallow portion has gotten a good bit of work. A new step has been added, increasing the two previous steps to three. Crews installed a double pole in place of what used to be a single pole to make it easier to get out of the water.

“People can get a much better grip on the double pole,” Blount said. “Having three steps instead of two will make it easier to get out as well. They are not as steep as the old ones.”

The next step is to work on the pool deck. A contractor from Wetumpka, Precision Flooring, will oversee that job.

“There is some chipping around the rails that will be taken care of,” Blount said. “They will sandblast the top coat. In some spots, the concrete is coming up. This will be filled in.”

Once the community center fills the pool with water, it should take approximately four weeks to get the chemicals right. The central part of the Community Center pool goes from four feet to seven feet in depth.