Valley returns from break with 15-0 win over Wadley 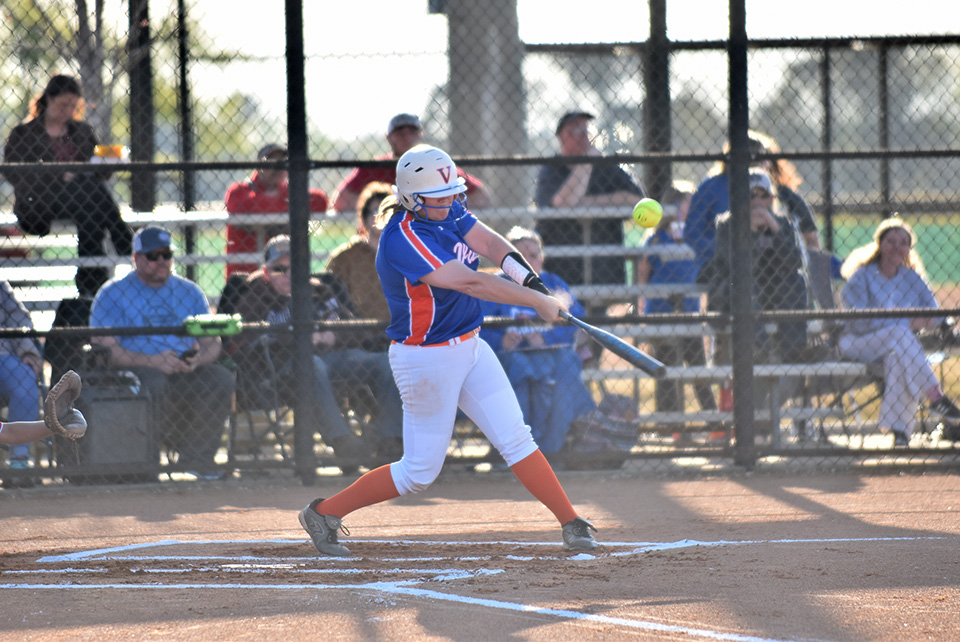 Rashad Milligan | Times-News Green Machine: Valley senior Maegan Green makes contact with a ball in the bottom of the first inning against Wadley on Monday afternoon.

VALLEY — The Valley softball team (7-5, 1-0) returned from spring break in dominant fashion with a 15-0 win over Wadley (2-5, 2-0) on Monday night. The victory marked the sixth straight win for the Rams

“I gave them a break last week,” Valley head softball coach Torie Hopkins said. “I know they just needed a mental break, but the girls came out great, ready to play and opened up a big week.”

Before the pair of area games, however, Valley took the lead against Wadley early on Monday and never looked back.

Senior Maegan Green and eighth-grader Alyssa Burrows were among two Rams who hit RBIs in the first inning to get Valley off to a 6-0 lead in the first inning. It appeared as if many of the Wadley infielders had trouble finding the ball in the during the sun setting hour in the 6:30 p.m. EDT. start. The Rams capitalized on Wadley’s fielding errors by getting more runners on base and advancing the runners who were already on.

Valley junior Faith Graben led off the second inning for the Rams with an inside-the-park home run. After an inning that mirrored the first for Valley, the Rams headed into the third inning with a 12-0 lead.

Another aspect of the game that Valley outperformed Wadley came on the defensive side of the ball. The sun setting didn’t have as much of an effect of the Rams fielders because the home team was used to the field, Hopkins said. After dropping a pop up at first base, Green made an acrobatic over-the-shoulder catch over the foul line in right field in the third inning.

“The girls just came strong and ready,” Hopkins said. “I was really worried about giving them a ‘break’ on spring break, but they came out and did their job like they’re supposed to. I’m hoping that it’s going to carry over into Tuesday and Thursday’s game.”

As more shade began to cover the field, Wadley caught more fly balls and held Valley to one run in the third inning.

Valley took a 14-0 lead in the fourth inning, and a wild pitch scored the final Rams runner to end the game courtesy of the run rule.

Valley opened its season against Tallassee in a 14-0 loss at the Central Alabama Classic on Feb. 22. Brewbaker Tech’s loss in area play came from a 7-0 loss to Tallassee on March 14. Hopkins said that she hopes Monday’s win gives the Rams a boost of confidence heading into the matchups.