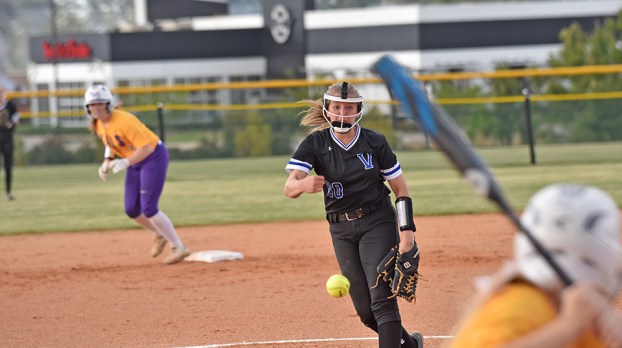 BASES LOADED: Valley eighth-grader Alyssa Burrows delivers a pitch with the bases loaded at the top of the fifth inning against Tallassee on Thursday night. Photo by Rashad Mlligan

Valley softball gives up big inning to No. 3 Tallassee, loses 9-2

“We talked to the girls last night about being positive and making sure that you come out believing that you can win and I really feel like they came out here with that mentality,” Valley head softball coach Torie Hopkins said. “They had one bad inning that lost this game for us tonight. They still came out to play, we only struck out four times tonight, everyone else hit the ball. Even if they lost, I’m still proud of their positive attitudes and their momentum.”

Tallassee broke free in the fifth inning by bunting until the bases were loaded. The visitors then popped a hit directly up the middle that scored two runners to take the team’s first lead since the top of the first inning. The bases were soon loaded again, and another Tallassee runner scored after an infield fly dropped over a Valley defender’s head.

Hopkins admitted after the game that there was some inexperience on the field due to one player being sick.

“We had players step up today and play positions that they don’t normally play,” Hopkins said.  “I’m very proud of them coming out here and just doing what they needed to do today.”

At the top of the sixth inning, a wild pitch allowed Tallassee to score again and increase the lead to 5-2. The Tigers then got a two-RBI double to drop into left field before another RBI double was hit to up the lead to 8-2.

“I told the girls before the game not to expect strikeouts the entire night,” Hopkins said. “They’re going to hit the ball. You just have to be prepared to do your job in the field. Going into the fifth inning, we only had one throwing error. They didn’t play badly. I’m not upset at their ability, we just had one bad inning.”

Tallassee yanked one more ball to left field, but sophomore Kennedy Silmon made the catch for the second out of the inning. A Tallassee groundout to short ended the frame.

Valley couldn’t get anything going at the plate in the bottom of the sixth inning, and junior center fielder Faith Graben made a leaping catch on a line drive hit.

“I am very confident in both of those girls,” Hopkins said of Silmon and Graben. “Kennedy  missed a line drive that was really hard, but other than that, I’m very confident when the ball is hit to them.”

The Tigers’ bats kept both outfielders busy, as Tallassee dropped another base hit into left field, before dropping the final RBI single of the night into left-center field.

Valley now has less than two weeks of regular season play remaining, with the final game being on April 23, before the start of the area tournament for a chance to go to regionals.

“In every game, we tell them to ‘win the inning,’” Hopkins said. “That’s exactly what I told them tonight. Up until the fifth inning, we won every inning. In order to win the game, we need to win inning by inning. We’re capable of beating every team out there, it’s just getting the girls to play to the best of their ability to play together as a team.”

Valley will play at the O-Dawg Invitational at Opelika High School on Friday. Beulah will also be in the tournament.